Forced conversion: Asha’s family raises questions about her statement to the media

Forced conversion: Asha’s family raises questions about her statement to the media

Asha, who disapp­eared on March 3, says she conver­ted to Islam
By Our Correspondent
Published: April 16, 2012
Tweet Email 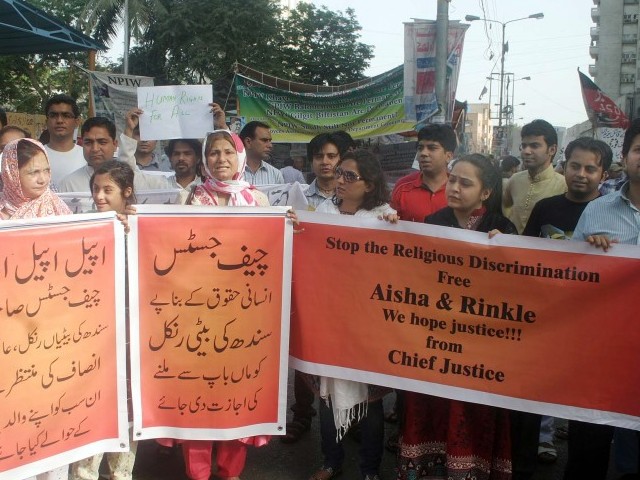 At a protest held against forced conversions at the press club on Sunday, Das said that Asha’s family refuses to believe her statement as they know that she was forcefully converted and married off. PHOTO: PPI

KARACHI: The Hindu community rejected the claims of 15-year-old Asha Kumari, who on Friday said that she embraced Islam and married a Muslim man of her own free will.

“She was kidnapped from a beauty parlour and for more than forty days, there was no news about her whereabouts,” said Asha’s uncle, Sundar Das, in bafflement. “On April 13, she suddenly turns up at the Supreme Court and says that she chose to change her religion. What is this?”

At a protest held against forced conversions at the press club on Sunday, Das said that Asha’s family refuses to believe her statement as they know that she was forcefully converted and married off.

The community blamed MNA and Pir of Bharchondi Sharif, Abdul Haq aka Mian Mitho, for backing the alleged kidnapping, conversion and marriage of Asha Kumari, who disappeared from a beauty parlour in Jacobabad on March 3.

The Pakistan Hindu Council patron, Ramesh Kumar, who was at the Supreme Court hearing on Friday, alleged that Asha’s appearance was merely a drama staged by the kidnappers. “She came to record her statement before the date of her hearing which is on April 18,” said Kumar, while referring to her absence at the earlier scheduled hearing on March 26. “No statement was recorded but she spoke to the media in the presence of Mian Mitho’s sons and said that she converted of her own choice.”

Meanwhile, the community demanded that action should be taken against the parliamentarian. “Why is Mian Mitho involved in each and every case of kidnapping and forced conversion?” asked the protesters. “She embraced Islam at Bharchondi Sharif and his men also accompanied her to the court. Why is the government not taking any action?” The protesters also called for a judicial commission to investigate forced conversions. Mangla Sharma, the Pak-Hindu Welfare Association chairperson, said that the commission should look into at least the six-month old cases of alleged forced conversions and inquire about the conspiracies being hatched against the Hindu community.

“The man Asha has claimed to marry of her own free will is a father of four children. Also, if she was not forced to convert, then why wasn’t she presented earlier,” added Sharma.

The family of Rinkle Kumari also participated in the demonstration.

Rinkle, who now goes by the name Faryal, had also stated earlier that her conversion to Islam and her marriage to a Muslim boy were by her own choice. While the family had come to express solidarity with Asha, they came forward with their own demands. “The parents should be allowed to meet Rinkle at the women’s shelter,” said Rinkle’s brother-in-law, Shankar Das. “Her mother’s condition is deteriorating day by day and she just wants to meet her daughter.”