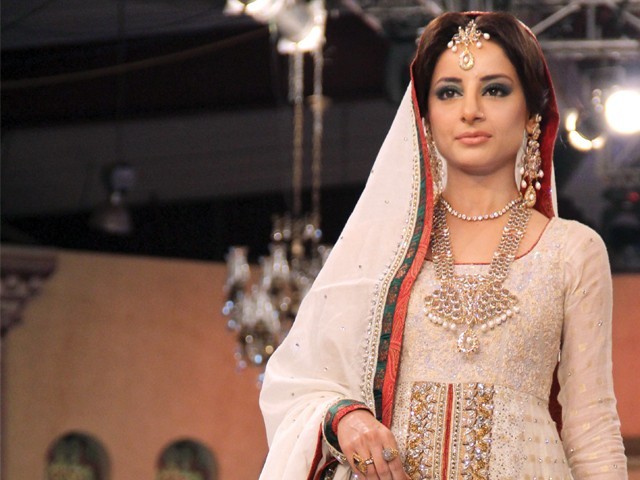 Despite our highest expectations for the Pantene Bridal Couture Week 2012, the evening was, at best, disappointing. Had it not been for hairstylist Saba Ansari of Sabs and Nomi Ansari’s designs for the elegant bride, the evening would have been a total waste. Besides bridal designs sashaying on the runway, there were also performances by Body Beats Dance Studio and Club Caramel.

With heavily embellished peshwazes and chooridaars, Imran retained her signature style with this collection. However, the velvet borders and overcoats in Eastern cut and her usage of greens and oranges was a slight departure from her usual style.

While the first few pieces which appeared on the runway could not be classified as bridal wear at all, the colourful Eastern collection which came later in banarsi and velvet fabric was a bit closer to traditional bridal wear.

Sheikh’s collection was an ode to the Nawab and featured ghararas, chooridaars and saris. Using jamawaar, the designer toyed with colours like white and shades of purple, giving the collection a regal look.

True to his signature style of vibrant colours and cuts, Ansari displayed a range of peshwazes, angarkhas, chooridaars and ghararas in shades of pink and red and then moved on to lilacs, purples and magentas.

Although the hairstyling was not meant at all for a traditional or modern bride, Ansari’s unconventional hairdos had an appeal of their own. She combined class, elegance and creativity in a brilliant way that proved her strength as a hair expert.

From polkis and kundan to zircons, rubies and emeralds, this jewellery collection was a fusion of East and West. However, the pieces were not specified to a specific era. Instead, they were statement pieces that could be worn everywhere from a dinner party to a bridal event.