Higher education: Visa denials a myth for drop in Pakistani students in US

Higher education: Visa denials a myth for drop in Pakistani students in US 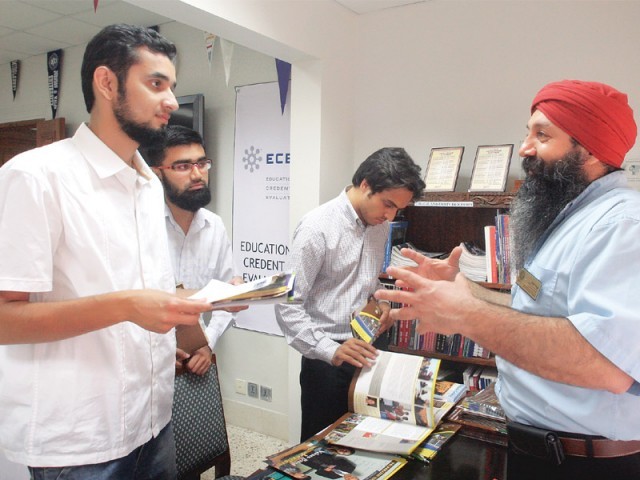 Representatives from universities SUNY Buffalo, Valparaiso University and University of Northern Iowa gathered at an education fair at the Prometric Centre. PHOTO: EXPRESS

It is a myth that fewer Pakistani students went to university in America because of more post-9/11 visa denials. It has simply happened because more higher education institutions opened at home.

The number of Pakistani students in the US dropped from over 8,500 in 2001 to about 5,000 in 2012. “In the last 10 years, there has been an increase in the number of higher education institutes in Pakistan. This encourages many students to study in the country and not apply abroad,” explained Shazia Khan, who deals with the Fulbright outreach programme.

“The United States has always been eager to increase opportunities for Pakistani students,” she told The Express Tribune at the US educational fair organised by the United States Educational Foundation in Pakistan on Tuesday. The foundation is an advisory body that helps Pakistani students secure the best possible opportunities for higher education in the US.

The fair brought together Pakistani students, parents and working professionals and gave them a chance to meet representatives from three American universities.

A former Fulbright scholar Muhammad Bilal Lakhani (not The Express Tribune’s publisher) was also there to help potential candidates increase their chances of being accepted. “In the US they believe in a person and not in numbers,” he said while talking to the students. “While applying for the Fulbright, you will have a good chance of being considered if you build a logical case around your personal statement – your beliefs, endeavors, values and aspirations.”

A civil engineering student from Sir Syed University of Engineering and Technology, Babar Ali Shaikh, said that he wanted to transfer his credit hours to Valparaiso University because in his opinion Pakistan engineering courses were not up-to-date. Since he cannot finance his education, he was thinking about applying for a scholarship.

The US academic representatives appeared pleasantly surprised with their experience in Pakistan. “Pakistani students are eager and smart and would make a welcome addition to any US college or university,” said Kristi Marchesani, the assistant director of international admissions at the University of Northern Iowa. The representative of the Valparaiso University Moninder ‘Holly’ Singh told The Express Tribune that he enjoyed the one-on-one interaction with the students and sincerely hoped to see Pakistani students on campus.

According to Shazia Khan, the US embassy was still providing Pakistani students the opportunity to study abroad, and many of them were taking them up.

The US cultural affairs attaché, Anthony M Jones, told The Express Tribune that the fair promoted the mission of mutual understanding between the people of Pakistan and the United States through educational and cultural exchange. “Our doors are open to Pakistanis to study in the US,” he said. “We want more Pakistani students to enrich our classrooms and benefit from our world-class universities.”