Hashmi says that Hafiz Saeed is a preach­er of peace in the world, spent time with them in the univer­sity.
By Owais Jafri
Published: April 6, 2012
Tweet Email 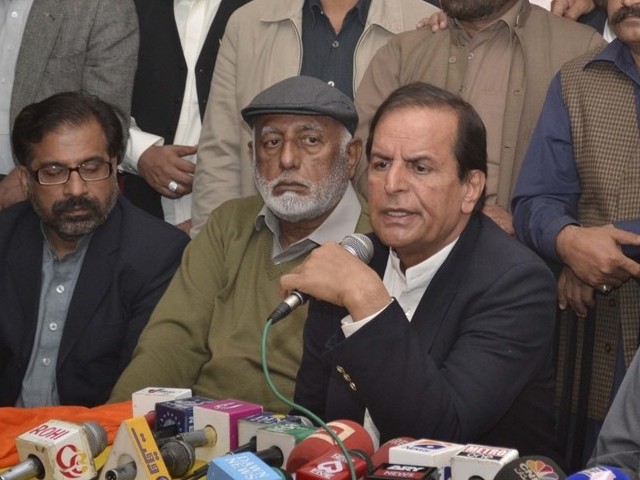 MULTAN: Javed Hashmi, the Paistan Tehreek-i-Insaf President, on Friday extended his support to Jamaatud Dawa chief Hafiz Saeed on whom the US recently placed $10 million bounty for his alleged role in the 2008 Mumbai attacks.

Calling him a preacher of peace in the world, Hashmi said, that if something should happen to Hafiz Saeed, then the entire nation will be responsible.

He was addressing a public demonstration organised by the Difa-e-Pakistan Council in Ghanta Ghar  Square in Multan on Friday. The gathering was also addressed by leaders of Jamaat-e-Islami, Lawyers community, Jamat-e-ahl-e-hadees, Ahle-SunnatWal-Jamaat, Jamiat ulema-e-Pakistan, and members of the Pakistan Muslim League-Nawaz.

Leading the ceremony, Hashmi said that he had spent his entire life with Prof Hafiz Saeed and Hafiz Abdur Rehman Makki at university as both were union leaders. They were one of the most pious students in the university, he vouched.

He further said that the services of the ‘most wanted’ men were for the welfare of the country and can never be forgotten. He said that a social worker can never be a terrorist but all those declaring him terrorist are the real threat to the peace of the world.

“I salute the workers of Jamaatud Dawa and their unity, their passion to fight for the honour of their leader who deserves respect and honour by all the Muslims of the world.”

The PTI president revealed that name of Difa-e-Pakistan council had been suggested by Hashmi and Prof. Hafiz Saeed had honoured me by declaring this as the final name of the council.

Hashmi added that in his experience, he found Prof Hafiz Saeed and Hafiz Abdur Rehman Makki always loyal, and dedicated to Islam, Muslim Ummah and Pakistan.

He concluded that every citizen of Pakistan will fight for Prof Hafiz Saeed and will become a Hafiz saeed if something happened to the JuD chief.

Hashmi further added that he had resigned from the parliament only because it had become the slaves of US, which like India, worked against the interests and people of Pakistan.

The participants in the gathering raised slogans against Obama, Hilary Clinton and United States and vowed their complete support to Hafiz Saeed and Jamaatud Dawa.