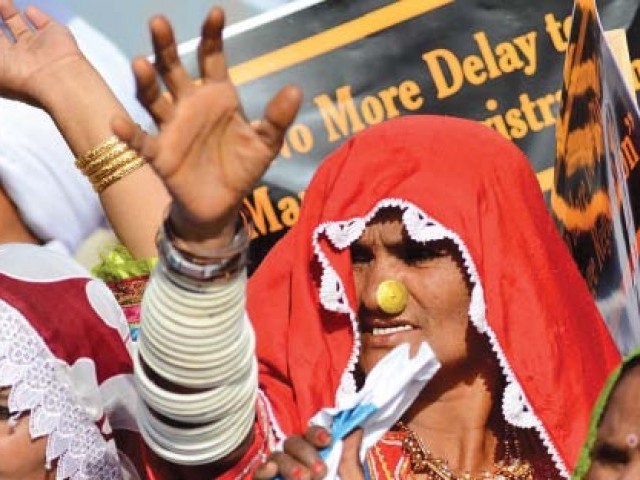 ISLAMABAD: The country’s largest minority, the Hindu community, has demanded the government to introduce and implement legislation on an immediate basis to protect their marriage rights.

During a protest rally here on Thursday, they also appealed to the chief justice of Pakistan to take notice of absence of laws for their rights.

The move comes a day after the Supreme Court took serious notice of non-registration of Hindu marriages in Pakistan and asked the National Database and Regulatory Authority (Nadra) to amend its rules and regulations for issuance of identity cards to Hindu women within two days.

While condemning the prolonged delay in the passage of the Hindu Marriage Registration Act, scheduled caste Hindus gathered outside the National Press Club on Thursday and marched towards the Parliament House to lodge their protest against what they called “social discrimination” resulting from an absence of this law.

The demonstration was organised by Scheduled Caste Rights Movement (SCRM) in collaboration with ActionAid.

The protestors, including members of the Hindu community from across the country and civil right activists, held a mock marriage ceremony in front of the National Press Club to mark the ineffectiveness of a marriage when it is not registered with the government.

“In Pakistan no one listens to us, we are helpless; our married women are forced to convert and are abducted by influential people and raped, sold or re-married to non-Hindus,” said Chami Mai and Tipu Mai, who came all the way from Bahawalpur to join the protest. SCRM president Guru Sukh Dev said that scheduled caste Hindus realised they needed a collective platform for pitching their demands four years back.

SCRM lobbied with many parliamentarians and introduced a marriage registration bill in the parliament which is still pending.

In 2011, a bill for a law to register Hindu marriage was presented in the National Assembly but so far there has been no progress.

“We earnestly demand an early passage of the Hindu marriage registration law so that it brings an end to our sufferings and insecurities,” Dev said.