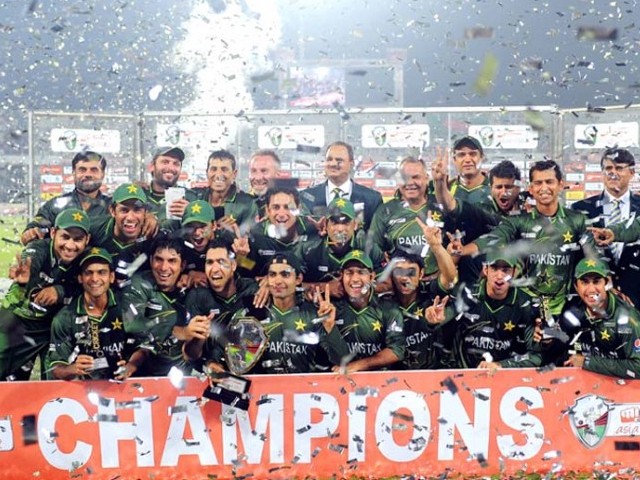 KARACHI: Pakistan on Friday celebrated a nail-biting victory in the Asia Cup after a two-run win over Bangladesh that was hailed as providing some much-needed relief to the country.

Pakistan clinched only their second Asia Cup title in Dhaka late Thursday, sending delirious fans pouring onto the streets in major cities to celebrate, though some missed the action on the field because of power cuts.

Despite orders from the prime minister for no power cuts during Sunday’s match against arch-rivals India and Thursday’s final, fans still complained of outages at home.

“We had to come out and watch the matches on big screens in the streets as power outages were as frequent as ever,” complained Raza Elahi, a pupil at middle school.

Former players were delighted, having been sceptical that Pakistan would perform well after being routed 4-0 by England in a one-day series last month.

“It’s a wonderful performance,” said Moin Khan, who was captain when Pakistan won their first Asia Cup, in 2000, also in Dhaka. “Our players have given the nation great joy and we are proud of them.”

“Congratulations to our team for winning the title,” said chief selector Iqbal Qasim, who also had warm words for Bangladesh.

“They beat India and Sri Lanka in the tournament and proved a tough opponent,” he said.

Bangladesh proved that “they are no more the minnows of cricket”, said Qasim. “I hope they will carry on the good work and be reckoned as one of the major forces in Asia and the world.”

Former captain and director general of the Pakistan Cricket Board, Javed Miandad, said the dramatic win was testament to the side’s never-say-die attitude.

“It’s a great win and showed the fighting abilities of the team, but the hosts played very well,” said Miandad, a member of Pakistan’s World Cup winning team in 1992.

But another former captain, Rashid Latif, cautioned that Pakistan must not run away with themselves and should “sit down and analyse our weaknesses”.