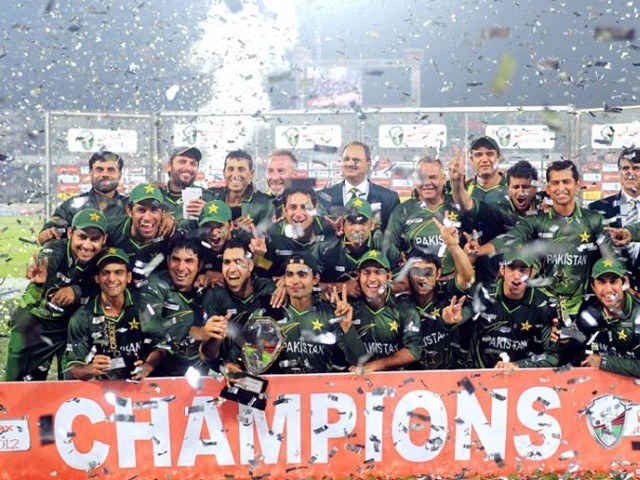 Pakistan were able to edge out Bangladesh in a tense final and clinch their second Asia Cup title with Aizaz Cheema delivering the over of his life to make sure the hosts did not record their third successive win in the tournament. PHOTO: AFP

Pakistan claimed the Asia Cup with a thrilling two-run victory over a dogged Bangladesh, breaking the hearts of home supporters who saw their unfancied side take the game to the wire.

The hosts, appearing in their first Asia Cup final, looked well placed to win the day-night match but faltered in the final over. Needing nine to win with three wickets in hand they could manage only six, as Cheema held his nerve to see out the game.

Cheered by a capacity crowd, Bangladesh started their innings strongly, reaching 68 for the opening wicket through Tamim and Mohammad Nazimuddin (16), before Pakistan struck with three wickets in the space of 13 runs.

Tamim hit eight fours in his fourth successive half-century before being caught by Younus Khan in the covers off Gul.

Shakib kept Bangladesh’s hopes alive with an 89-run stand for the fourth wicket with Nasir Hossain (28), but his dismissal in the 44th over put the hosts under pressure.

Mortaza struck in his third over when he dismissed opener Nasir Jamshed before seamer Nazmul Hossain trapped Younus leg-before.

Bangladesh’s fielders expertly supported their bowlers with Nasir running the tourist’s captain Misbahul Haq out before Nazmul held a good catch to account for Mohammad Hafeez. Shahid Afridi made a brisk 22-ball 32.

Misbah, who saw fortune swing from one side to the other, was a relieved man.  “It was a wonderful victory,” said the captain. “All the guys contributed and Sarfraz’s innings was vital.

“We were hoping that anything around 225-230 would be a fighting total and our bowlers did very well. This is really a new Bangladesh team we’ve seen.”

His counterpart was disappointed after Bangladesh had recorded upset wins over India and Sri Lanka but failed to clear the final hurdle. “We’ve fought in all the games and achieved a lot in the tournament,” said Rahim.