A rare exhibit: Depicting isolation of the human condition through art

A rare exhibit: Depicting isolation of the human condition through art 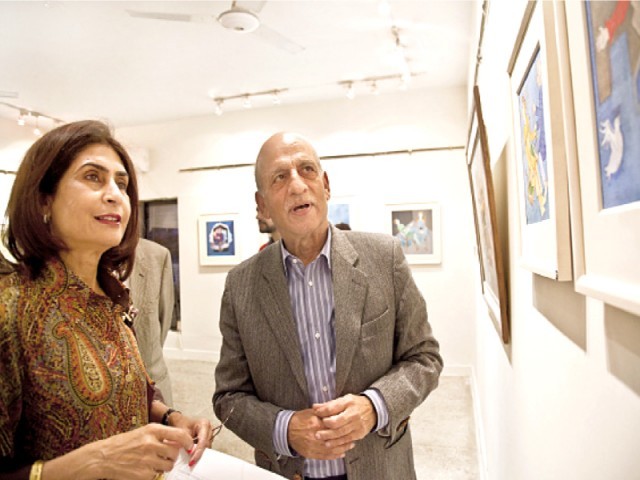 Hyat shows various depictions of individuals at different points of human development interacting with each other to validate themselves. PHOTO: MYRA IQBAL

Boasting a diverse mix of acrylic works and the abstraction of human figures, Kamal Hyat’s painting exhibition started at the Nomad Art Gallery on Thursday.

With work that could vary in interpretations, the most common one most probably is the unshakable loneliness and isolation of the human condition.

However, Hyat feels his work “is an expression” and doesn’t stem from a set idea. “I don’t decide anything about my paintings. I paint intuitively and let it develop on their own, in such I don’t have full control over the pieces I create,” he said.

His humble attitude towards his work is clear, as it is not just an extension of him, but something bigger.

Although Hyat doesn’t seem keen to classify his paintings under directed themes, he is open to other’s take on his work. Zainab, a student of fine arts, questioned if one of his paintings dealt with creation, to which he beamingly replied, “It is whatever you think it is. If it looks like creation to you, it is.”

Subjectivity is thoroughly explored in Hyat’s paintings and his own non-judgmental sentiments translate well on to the canvas. The bigger canvases portray a full story of search of identity and emotional responses in a rural landscape. These two paintings show not only just young men and women which most artists use as subjects, but they also show children, elderly and even animals.

Furthermore, Hyat shows various depictions of individuals at different points of human development interacting with each other to validate themselves. For instance, a little girl is shown petting a dog, a young man is riding a horse, a young man and woman are embracing and two women are speaking in a small room. In such the role of the ‘other’ in defining individual identity is pivotal in some of his work.

The social connotation in identity formation, though not a deliberate attempt on Hyat’s part, is one of the many possible interpretations which can be made of his work. However, his social involvement in fund-raising is undeniable. “Hyat has been a banker, an artist and is now working closely with the World Bank’s poverty alleviation project and I’m delighted to see his work on these walls,” said National Integration and Heritage Secretary Faridullah Khan, the chief guest at the exhibition’s opening.

Nageen Hyat, director and curator Nomad Art Gallery (NAG), said it was quite tasking to bring his work from Lahore but was worth it as his work is a treat and always evolving.

Hyat’s formal training was under Moyene Najmi, one of the pioneers of the modern art movement in Pakistan. Later, regular interaction with renowned painters helped him develop a deeper understanding of contemporary art.

The exhibition is going on at Nomad Art Gallery and will continue till April 3.

Conference: ‘Climate change at its current trend could cost Pakistan $14 billion a year’