The film has a fresh start , but soon turns almost as barren as the red planet it is set on.
By Noman Ansari
Published: March 26, 2012
Tweet Email 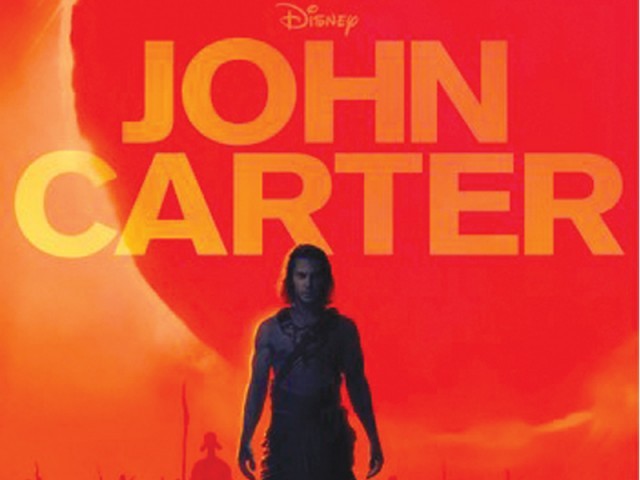 The film has a fresh start , but soon turns almost as barren as the red planet it is set on. PHOTO: PUBLICITY

Between 1912 and 1943, John Carter, star of author Edgar Rice Burroughs’s pulpy sci-fi Barsoom novels, was an icon. The books were set on the dying planet of Mars, known to its inhabitants as Barsoom, and featured themes which became the archetype for countless works of sci-fi/fantasy that followed, including Flash Gordon, Star Wars, and even Avatar. Unfortunately, this genre defining popularity has resulted in a 2012 adaptation of his first adventure, which feels worn-out in its over-familiarity.

John Carter starts promisingly enough in the year 1868, as we are introduced to the wisecracking John Carter (Taylor Kitsch), a former Confederate army officer, who is living a dangerous life as a gold prospector, while dodging the native Apache Indians, as well as the 7th Cavalry Army regiment. Carter, who speaks in a voice so gruff, you’d think he is one cigarette puff away from lung cancer, finds himself teleported to the planet Barsoom through a series of mystical events.

Here, Carter discovers that the lower gravity allows him superhuman abilities, a fact that is immediately noticed by Tars Tarkas (Willem Dafoe), the leader of the giant four-armed green-skinned alien Tharks, who capture him.  Meanwhile, elsewhere on the planet, the cities of Zodanga and Helium, which are inhabited by human-looking Martians, have been at war for thousands of years. The sinister leader of Zodanga, Sab Than (Dominic West), starts winning the battle, thanks to a special weapon gifted to him by the mysterious race of Therns.

At this point, Dejah Thoris (Lynn Collins), the Princess of Helium, escapes after her father tells her she must marry Sab Than, in order to broker peace. She encounters John Carter, who is escaping the Tharks, and is immediately charmed by his cavalier attitude, bone-crushing strength, and all-round badassery.

Like the princess, we too are initially charmed by the film’s interesting alien creatures, swashbuckling action, and self-aware humour.

Unfortunately, the chemistry between John Carter and the princess Sab Than is non-existent, and their interstellar romance seems forced at best, thanks to some particularly lifeless acting.

John Carter reportedly had a gargantuan $250 million budget, which was clearly spent on its non-stop CGI effects, rather than a better cast or script. Later, undercooked themes like ‘a hero with a tragic past’, ‘an outsider fighting for the aliens against the odds’, are slapped on too quickly to feel coherent, while the action is stuffed down our throats at an express pace.

As John Carter progresses, the freshness of the film evaporates rapidly, until the film is left feeling almost as barren as the red planet it is set on.

And the award goes to…