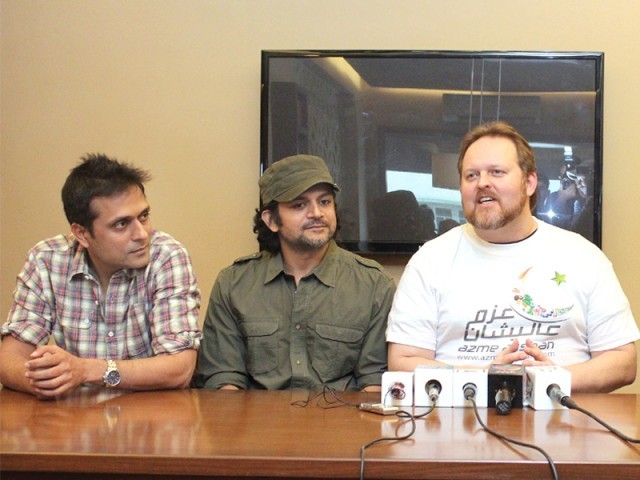 Strings and Todd Shea will perform together in Karachi. PHOTO: PUBLICITY

American musician and relief worker Todd Shea is teaming up with Strings to rock Karachi this weekend on March 24. “If we can show the real Pakistan, we can stop drone attacks,” spoke Shea in his characteristically confident manner at a press conference held at Gloria Jean’s Coffees.

A lone ranger, Shea has done tremendous relief work in Northern Pakistan and claims that “Allah has sent me here with a purpose,” and is perhaps the only one to realise that physical relief must be accompanied by psychological relief. “I would like to invite other local corporations to also support NGOS like Todd’s Comprehensive Disaster Response Services (CDRS) which has been working consistently over the last six to seven years in Pakistan, doing work that we as Pakistanis have been unable to do,” spoke Azfar Ashry, owner of Gloria Jean’s Coffees.

“Music and food are the only two ways to get to people’s hearts,” joked Shea. Hence, he has teamed up with fellow musicians around the world under the banner of ‘Sonic Peacemakers’ to perform in Pakistan. His latest effort was in Muzaffarabad, where a concert was held after a decade and his next venture will be at the Carlton Hotel with Strings. “It’s really commendable and inspiring what Todd has been doing for Pakistan,” said Faisal Kapadia of Strings. “It’s great to see someone who isn’t Pakistani by birth do so much for the country and so we instantly connected with Todd and the Sonic Peacemakers to help out.”

The tickets are priced at Rs2,500 and while acknowledging the steep price, Shea says ,“It’s at a premium price for a premium cause with premium musicians.”

Apart from the concert however, Shea has complied a CD titled ‘Songs from Pakistan and Beyond’ that feature leading artists like Rahat Fateh Ali Khan, Atif Aslam along with as yet unknown voices from Khyber-Pakhtunkhwa and Balochistan. “All these songs were given for free as donations,” said Shea, adding that Strings have donated their song “Mein Tou Dekhoonga”.

Calligraphy: Living on a prayer