Book market vies for the attent­ion of passer­sby with men who recite verses from poetry by the Arab writer.
By AFP
Published: March 17, 2012
Tweet Email 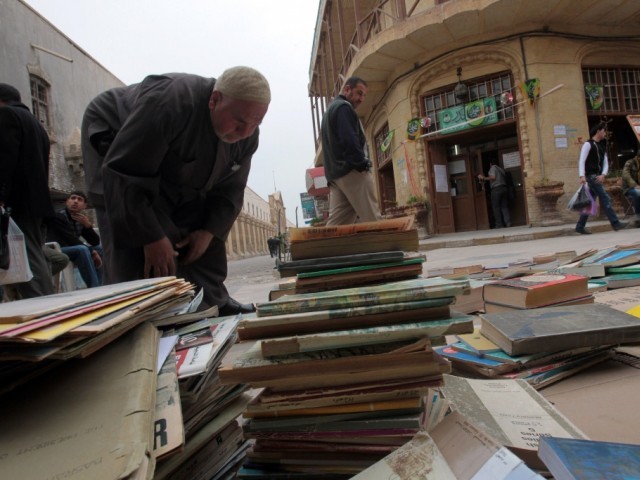 In a picture taken on February 25, 2012, Iraqis look at books dispalyed outside bookshops in Baghdad's al-Mutanabi street. PHOTO: AFP

BAGHDAD: After a recent wave of attacks in Baghdad, urbane intellectuals sought refuge, as they have for years, in a storied market-place that has been their oasis in the capital’s chaos: Mutanabi Street.

It comes alive on Fridays, when its book market vies for the attention of passersby with men who recite verses from poetry by the Arab writer after whom it is named as others sip hot lemon tea at the renowned Shabander Cafe.

And it was no different on this particular Friday, just a day after bomb attacks and shootings left dozens dead in the capital.

“I have been coming here for 30 years,” said Kamil Abdulrahim al-Saadawi, his hands clinging to recently purchased books.

“Every Friday, I wake up and I tell myself, I will not come. But Mutanabi is like a sweetheart – she seduces you.”

Mutanabi Street was inaugurated in 1932 by King Faisal I and named after a leading 10th-century poet Abu al-Tayyib al-Mutanabi, who was born in what is now Iraq.

Regarded by Iraqis as an intellectual hub of the Arab world, it became over the decades a meeting place for writers, artists and intellectuals from across the capital.

With a statue of the poet at one end, the less than one-kilometre-long (0.6 mile) street is bracketed on the opposite end by an arch that bears an inscription from Mutanabi’s works.

“The desert knows me well, the night and the mounted men, the battle and the sword, the paper and the pen,” it reads.

Saadawi, a 59-year-old businessman, continued: “Mutanabi Street has nothing to do with the reality of Iraq – it is an isolated island, the Iraq of our dreams.”

The day before, 42 people were killed in nationwide violence and the country’s lawmakers finally ended their wrangling and came to agreement on a federal budget, months after it was first mooted.

Despite the talk on the street of Mutanabi being the ideal Iraq, it has not been immune from the brutal blood-letting that wracked the capital in the aftermath of the 2003 US-led invasion.

On March 5, 2007, a suicide bomber exploded his truck in Mutanabi Street, on the east bank of the Tigris River, killing more than 30 people and wounding at least 60, devastating the street’s historic book stores and coffee shops.

The attack badly damaged Shabander Cafe, and left its owner’s five sons dead. Their mother went blind from the shock of the attack and died just months later.

“That was our most difficult memory of the street, when the explosion happened,” said Abu Rabea, who has owned a book store on Mutanabi Street for nearly 40 years.

“I was on my way to Najaf (in central Iraq), and when I arrived, people told me, an enormous explosion happened in Baghdad.”

Placing his hand on his forehead, he began to cry, adding: “My friends were gone; I lost so many of them. Life was not the same anymore.”

The street itself returned to a semblance of normality in 2008, but 80-year-old owner Mohammad al-Khashali only reopened the cafe – originally founded in 1917 as a publishing house – in February 2009.

Now, Mutanabi Street is bustling with activity on Fridays, its narrow expanse crammed with street-side vendors and musty stores packed to the brim with literature.

“What makes us happy in this place is the lack of intolerance and hatred,” said Jamal Saya, who has run his legal book store for 25 years.

“Mutanabi is the best of this country’s culture.”

“I spend all my available time on this street, among the books. I want to grow up here.”

Quite aside from the violence that has plagued Iraq in recent years, Mutanabi has also been affected by a dramatic opening up of the types of books available in the aftermath of the 2003 US-led invasion.

Pre-invasion, the majority of texts were in Arabic and glorified Saddam, alongside a smattering of novels in English, French and German, and often-photocopied versions of university textbooks.

Visitors can now also pick up a wide variety of other goods, including eye glasses, stationery, maps, small toys and CDs.

As crowds jostled for space on the pavement and flipped through books, Naeem al-Shattri began to recite verses from Mutanabi’s poetry.

“Dearest place in the world,” the 73-year-old said, “where the best companion in time is a book.”