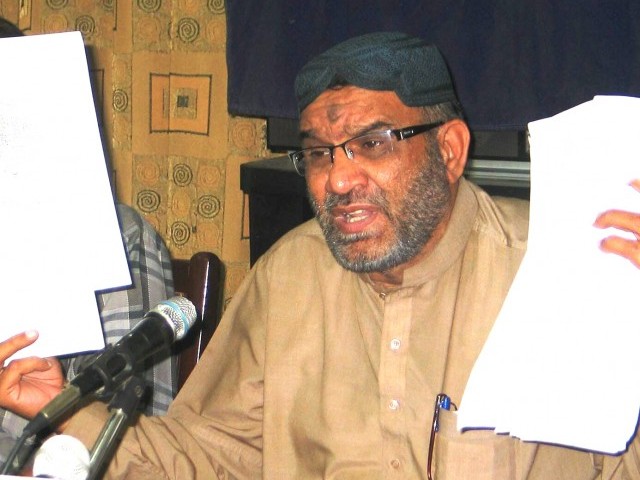 SP Zakir alleges that Malir SSP Rao Anwar and his associates are involved with the land mafia, the excavation of reti bajri or construction gravel and the smuggling of Iranian oil in his area. PHOTO: EXPRESS/MOHAMMAD SAQIB

KARACHI: The gloves are off and two police officers are at each other’s throats. One of them alleges that he was booked in a fake robbery case because he was fighting the other’s efforts to take over land in Malir.

Now that he’s out on bail on the robbery charges, which he says are fake, Hyderabad SP Zakir Hussain held a press conference at the Karachi Press Club on Wednesday to tell the world about the reason why he was targeted in the FIR. His lawyer Mohammad Hafeez was by his side for the press conference.

SP Zakir alleges that Malir SSP Rao Anwar and his associates are involved with the land mafia, the excavation of reti bajri or construction gravel and the smuggling of Iranian oil in his area.

“I’ve come to the press club with much difficulty and there was a lot of pressure not to hold this press conference,” said SP Zakir, adding that he had to change vehicles several times to get to the venue safely.

SP Zakir’s last job was as additional deputy inspector general of police in Hyderabad but since the Pakistan Peoples Party came to power he’s been waiting for a posting and sitting idle.

Talking about Sunday’s incident at Sohrab Goth, the SP explained that there is a dispute between a man called Anwar Brohi and his brother over 250 acres. The plot falls in the jurisdiction of the Ahsanabad police and the case is in court.

Despite a stay order, however, land mafia members have been after the piece of land. He named them as Afzaluddin, Ahsanabad police post in-charge Hidayatullah, Sohrab Goth SHO Ghaffar Jumani and FIA officer Shabbar Baloch, who has been posing as the deputy director of the FIA. SP Zakir alleged that SSP Rao Anwar was pulling the strings.

“These people are busy excavating reti bajri and drawing up plots,” he said.

SP Zakir went to the Ahsanabad police post after he heard that his friend Anwar Brohi and his men were arrested. When he reached the spot with Gadap SP Malik Altaf, SHO Jumani misbehaved with him and tried to arrest him. SP Zakir left the police post but the SHO arrested his driver Naseer and impounded his vehicle. It was then that the SHO registered a fake robbery case against him for stealing Rs20,000, said SP Zakir.

SP Zakir said that no one could do anything against SSP Rao Anwar as he was politically connected.

For his part, SSP Rao Anwar told The Express Tribune later on Wednesday that he refuted all the allegations. He said that SP Zakir was actually the land grabber and helped notorious men such as Sanaullah Zehri, Ali Zehri, Mansoor Zehri, Qadir Buksh and Nisar Pathan who have political backing.

Anwar said that if SP Zakir had a problem with him, he could go to the IG instead of “staging a drama by holding a press conference”.

He said that the police had registered a case against SP Zakir and that the Gadap and Malir police were gathering evidence against him which would be handed over to the IG.