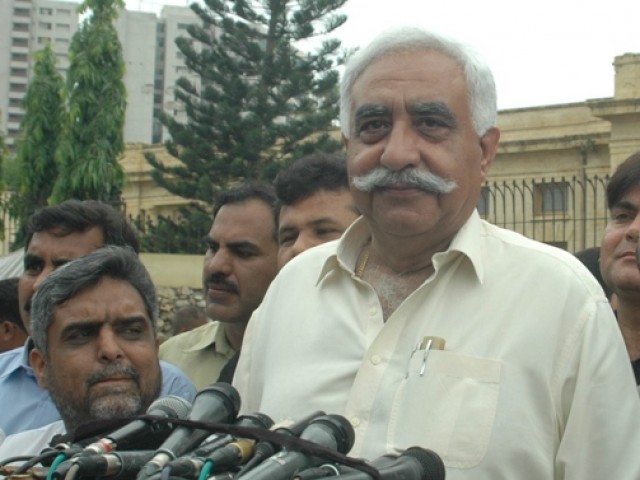 Irfanullah Khan Marwat, visited the house of a Christian domestic worker, who was accused of theft, on Tuesday. PHOTO: EXPRESS/FILE

In what seemed to be a move to garner support from Azam Basti’s Christian voters for the next elections, Pakistan Muslim League-N (PML-N) leader, Irfanullah Khan Marwat, visited the house of a Christian domestic worker, who was accused of theft, on Tuesday.

Last month, 41-year-old Elizabeth Saleem Bhatti, was accused of stealing jewellery, expensive watches and Rs2.5 million from the house of Jamshed Badar Zahidi, where she worked for four years, taking care of an elderly woman and doing the household chores.

Marwat, who also belongs to the same constituency, was flanked by Marvi Memon and the senior vice president of the PML-N in Sindh, Saleem Zia. “I will register a case against those who accused the poor woman of robbery,” said the former chief of the Punjabi-Pakhtoon Ittehad.

Elizabeth showed Marwat and the others around her one-room and scantily furnished house. “Look at my house. I don’t have enough money to buy flour. Does it look like I stole Rs2.5 million?” she asked them.

A frail-looking Elizabeth, also the mother of five children, told Marwat that the Frere hall police had investigated the robbery and cleared her. But her former employers continued to accuse her and registered an FIR against her at the Defence police station on February 13.

“I don’t believe that there has been a robbery in the house,” she said, making her own conjectures. “They are just accusing me because they want to get money from me. My employer [Zahidi] had debts to pay. Or maybe they just wanted to kick me out and insult me.”

But what had irked the residents of Azam Basti the most were the derogatory remarks about her religion, made by Zahidi, who is a resident of DHA Phase I. “Why was her religion insulted? We will not tolerate this,” Marwat said. “Every citizen, Hindu, Christian or Muslim, is equal in our eyes.”

Meanwhile, Marvi Memon called her new party ‘progressive’ because it strongly believed in giving minorities their rights. She assured that she will discuss their issues with her party leadership. “I will discuss the issues of census, targeted riots, and discrimination with my party members.”

However, Memon’s serious expression turned bitter when she was asked if the party had come for ‘point scoring’ in the area for the elections. “We [PML-N] had always raised our voice on human rights issues. Today, we came to know about how this poor woman was being victimised and we came here. I don’t see any other party who has come to support her.”

Meanwhile, United Church of Pakistan Bishop Reverend Nazir Alam asserted that the case against Zahidi should be registered under the blasphemy law because he ridiculed Jesus Christ and the Bible. But the PML-N leaders made no such promise. “We are not tissue paper, to be used and then thrown away,” said the Bishop. “We demand justice and the implementation of Section 295.”