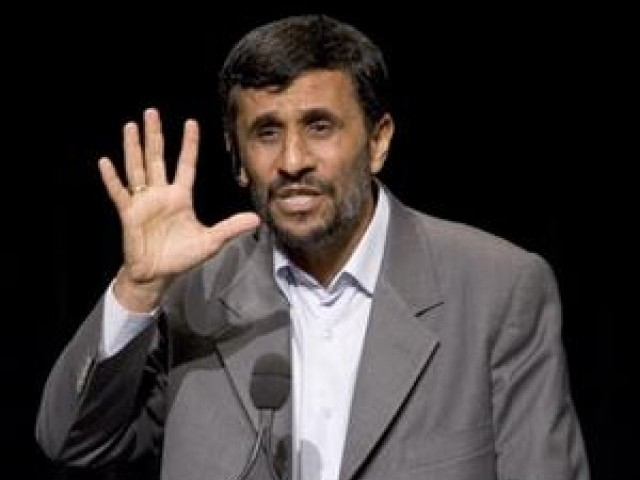 “They say all (options) are on the table. Well, let them rot there. You yourself will rot,” Ahmadinejad railed, in characteristically fiery language. PHOTO: FILE

TEHRAN: Iranian President Mahmoud Ahmadinejad said on Sunday that the West should drop its “bullying” stance against his country and insisted that sanctions imposed over its nuclear programme were having no more than a “psychological” effect.

“As God is my witness, the Iranian nation will not give a damn for (your) bombs, warships and planes,” he said in a televised speech in the city of Karaj west of Tehran.

“They say all (options) are on the table. Well, let them rot there. You yourself will rot,” he railed, in characteristically fiery language.

Ahmadinejad said the United States and its EU allies “should talk politely, and recognise the rights of (other) nations, and cooperate instead of showing teeth, and weapons and bombs.”

The United States in particular has repeated that “all options are on the table” when it comes to Iran, raising the spectre of military strikes against Iranian nuclear facilities.

US President Barack Obama, though, has cautioned against “bluster” in talking about possible war with Iran, saying there still exists a window of diplomacy.

Mohammad Nahavandian, the head of Iran’s chamber of commerce, said in a statement on Sunday that the opportunity of the new talks with the world powers “should be seized, and we should try to pay serious attention to removing all sanctions.”

The United States and other Western governments suspect Iran is working towards a nuclear weapon capability, although US intelligence services say Tehran has made no decision yet on whether to produce an actual bomb.

Iran, for its part, denies it is even researching nuclear weapons.

It has twice refused, though, requests by the UN nuclear watchdog to inspect a suspect military site for signs of alleged experiments with explosives of the sort that could be used to trigger an atomic blast.

The United States and the European Union have in the past four months greatly ramped up economic sanctions on Iran in a bid to force it to suspend uranium enrichment, the most sensitive part of its nuclear programme.

Ahmadinejad said: “They should know they will never prevail. There are no acute problems in the country and its economic pillars are strong. It is a psychological war.”

His government, he vowed, “will overcome all the problems.”

The Iranian president also dismissed Israel, which has been leading the bellicose rhetoric, as “a dead entity”.

“Do not think that just because idiot leaders of regional countries support you, you will cement your basis in the region,” he said.

Ahmadinejad also lashed out at Arab governments backing the Western pressure against his country – implicitly including Saudi Arabia, which is pumping extra oil to make up for curbed Iranian exports.

“The (Arab leaders) have no support among their people. If they give only one day of freedom to their nation, their people in the one day will topple them all,” he said.