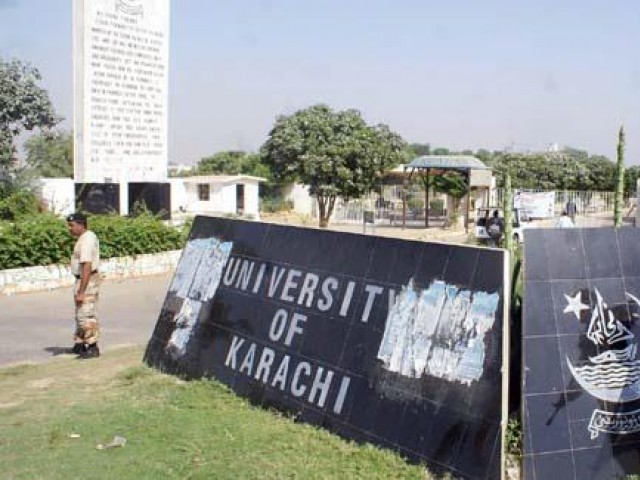 Officials at Karachi University (KU) had a nerve-racking Saturday trying to prevent a clash between the Islami Jamiat Talaba (IJT) and the All Pakistan Muttahida Students Organisation (APMSO) after the kidnapping of an IJT activist from the gate on Friday night.

According to the IJT information secretary, Mohammad Sohaib, Saleem Akhtar, a final-year Commerce student, was taken from KU’s Maskan gate around 9 pm on Friday when he was leaving for home. A batter and bruised Akhtar with cigarette burns was found unconscious near Mochi Morr in Gulshan-e-Iqbal at around 11:30 pm when an Aman Foundation ambulance received a wireless alert. He was taken to Aga Khan Hospital where he was put in intensive care.

Sohaib said that Ahktar was kidnapped by the APMSO’s Shahreyar, Anas, Burhan, Shahid alias Atthara (18) and Sunil, who took him in a black Toyota Corolla with tinted windows. An FIR has been registered at Mobina Town police station, nominating five APMSO activists.

Sohaib told The Express Tribune that around two dozen APMSO activists cordoned off Maskan gate on Friday night and stopped the university point buses for inspection. “They were armed and looking for IJT activists by examining everybody on board,” he said. “This is inhuman; they are starting something which will never stop.”

According to Sohaib, earlier on APMSO activists beat another IJT activist in the central library on Friday afternoon and the situation had heated up but both groups had resolved the matter by the evening.

APMSO’s secretary general Tausif Aijaz said the allegations were preposterous. “We had no information about the incident and got to know about the kidnapping of an IJT activist through university officials,” he said. “All activists of the APMSO were at Jinnah Ground to celebrate the ISI officer’s explanatory statement regarding the Mehran Bank scandal.”

Aijaz told The Express Tribune that the situation heated up inside KU when IJT activists tried to bar students from a birthday celebration in the geography department. “This so-called religious organisation wants to impose its own brand of Islam and wants to create a Waziristan-like situation here,” he said. Later, on Friday evening, Aijaz said IJT activists beat four APMSO activists Arsalan, Absar, Wahaj, Athar but the organisation did not react and talked to university officials about taking action. “Unfortunately, the rangers and administration are not playing their part,” he said.

Anticipating a reaction from the IJT, the APMSO had stopped its activists from going to university on Saturday.