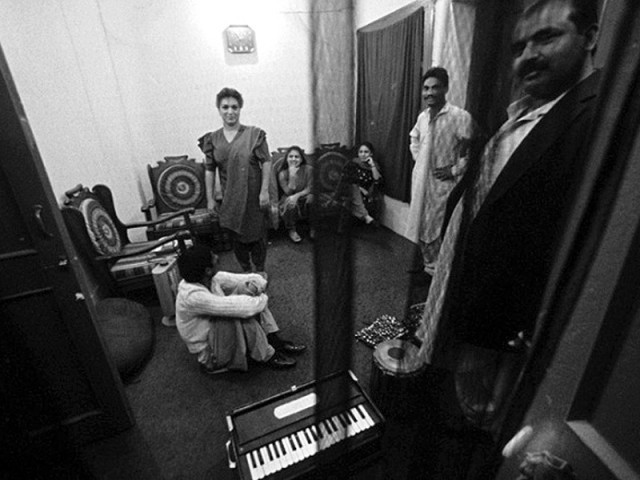 Pinky’s very pink yet empty existence pulled Claudine Le Tourneur d’lson towards Hira Mandi, the infamous red light district of Lahore. French-born Claudine discovered the area during her visit to Pakistan in 1988 and that was the beginning of a dangerous love affair that drove her to visit again and again.

Whilst travelling with her husband Cyril across Pakistan, Claudine stumbled upon the red light district while they stayed at Yusuf Salahuddin’s haveli for three weeks in the Walled City. This attraction to the area led Le Tourneur d’lson to dream about living in Hira Mandi and then writing a book about the magnificence of the area. After almost 24 years, Le Tourneur d’lson launched her book Hira Mandi in the city where it all began.

“I had never experienced such a culture before,” reminisces Claudine. “Prostitution through dance was an idea I had not been familiar with and hence it fascinated me.” During her three weeks in the Walled City, Claudine managed to make friends with artisan, restaurateur and resident of the area Iqbal Husain. “Through Iqbal’s eyes we saw a whole new world in Pakistan that was removed from regular society,” continues Claudine. “Iqbal, being the son of a dancing girl, saw life very differently and was able to explain the shortcomings of this life to me.” The author was impressed by Husain’s demeanour and the way he had cashed in on his reality and glamorised it for the rest of the world.

The life of a dancing girl

After seeing young girls being trained in the art of dance, Le Tourneur d’lson came across a young dancer who was very well known in the area — Pinky. “This young dancer truly fascinated me,” explains Le Tourneur d’lson. “Everything about her was pink — from her clothes to her make-up. She was so welcoming that she gave us a tour of her house and living quarters where she entertained guests and to my utter dismay and surprise, even that room was decorated completely in pink.” Pinky then became the inspiration for one of the characters in the novel.

In 2003, the author finally had the time and money to come and live in the red light district for two months to work on her novel. It was during this time that she found out that her old friend Pinky had passed away. “She had become pregnant and due to the lack of proper medical facilities, she was unaware that her child had died inside her. As a result, Pinky had contracted a fatal infection which she could not survive,” says Le Tourneur d’lson.

When asked about the difficulties she faced while researching for her book, Le Tourneur d’lson responds, “I was staying with Iqbal and that made my life here much easier. Because people in the area respected and trusted Iqbal, they learned to trust me as well.”

During her stay, she unearthed stories from the days of Partition and how the events in 1947 affected Hira Mandi.

By 2006, the book Hira Mandi was published in France and Le Tourneur d’lson dream had materialised. “The French Embassy took a keen interest in the project and took care of the translation of the book,” says Claudine. By the end of 2011, the book was ready to hit the subcontinent but the author decided to wait until she visited Pakistan for the Karachi Literature Festival to launch it.

“This book is a way to give some dignity to women who are looked down upon by society,” concludes Le Tourneur d’lson. “Before being dancing girls, they are human beings and they should be treated like humans.”

Claudine Le Tourneur d’lson became a freelance journalist after studying literature, History of Art and Egyptology in Paris. She works for French Media, television and has published 12 books that include biographies, travel books and two novels.