The fugitive: Court paves the way for return of Arbab Rahim

The fugitive: Court paves the way for return of Arbab Rahim

Police asked to provid­e securi­ty even inside the assemb­ly.
By Z Ali
Published: February 22, 2012
Tweet Email 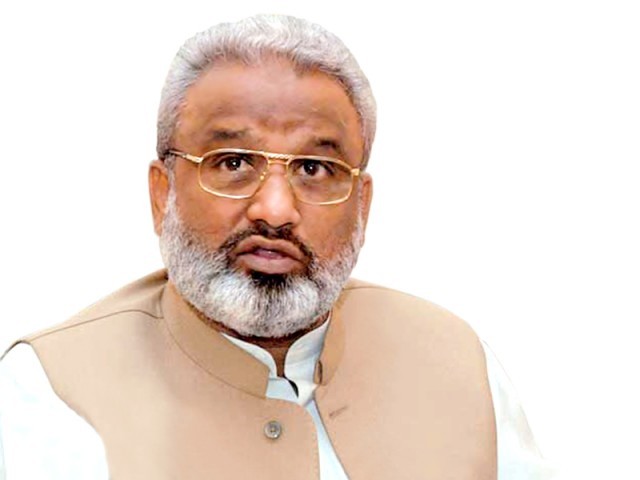 The chief of the Pakistan Muslim League faction known as the Likeminded group went into self-exile in April 2008 soon after taking oath as a member of the Sindh Assembly.

The supporters and workers of Arbab Ghulam Rahim’s party won a word of assurance from a court that their leader will neither be arrested nor booked in any case on his return to Pakistan.

A circuit bench of the Sindh High Court on Tuesday restrained the police from detaining the former chief minister or nominating him in any case without its permission. The order, which accepted the petitioners’ appeal, also asked for adequate security to be provided to Rahim, even inside the Sindh Assembly.

The chief of the Pakistan Muslim League faction known as the Likeminded group went into self-exile in April 2008 soon after taking oath as a member of the Sindh Assembly. His blunt and often offensive remarks about his political opponents, especially the Pakistan Peoples Party, earned him rancor to the extent that he was twice attacked on the premises of the Sindh Assembly, once with a shoe.

The petitioners, Siraj Rehman and Anwer Ali Shoro, who pleaded on Rahim’s behalf, argued that their leader was being treated as an enemy by the ruling PPP. His family and supporters are also being harassed and persecuted.

Their lawyer, advocate Yousuf Laghari, who is the former advocate general of Sindh, cited the Supreme Court’s decisions in 1988 and 2007 which paved the way for the return of Benazir Bhutto and Nawaz Sharif, respectively. The apex court’s orders had assured the two leaders that they would not be deported, arrested or put on the exit-control list once they had returned.

“He is eager to return to Pakistan and wants to contest in the next general elections,” the lawyer told Justices Faisal Arab and Syed Hasan Azhar Rizvi. “He is not being allowed to attend the provincial assembly.”

The mention of Rahim being prevented from attending the assembly brought on a tirade from the additional advocate general, Allah Bachayo Soomro, who was appearing on behalf of the government. He submitted a record of Rahim’s requests for leave and went on to read the dates from February 2009 to 2012 when leave applications were submitted to the speaker. “Last week, he sent a SMS (short text message) to [Speaker] Nisar Khuhro that he was not feeling well and had been advised against travelling by his doctor,” Soomro told the court.

The AAG submitted in writing to the court that Rahim’s name was not on the exit-control list and that no case had been registered against him by the government. “According to the Speaker, he [Rahim] has been on leave and has not been restricted from attending the sessions,” Soomro clarified, calling the petition ‘baseless’ and filed by irrelevant people. Rehman and Shoro are residents of Jamshoro district. The petition was filed in October, 2011.

Meanwhile, the media coordinator of the PML-Likeminded told a press conference here on Tuesday that Rahim’s return will be announced after a party meeting in Karachi on Wednesday. “The party wants him to be in the country at the time of the Senate elections,” the spokesman said without revealing the exact date.