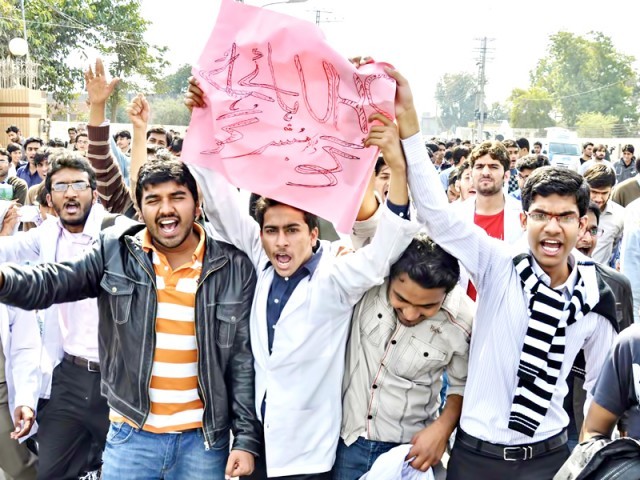 Scores of third year students of the Punjab Medical College (PMC) in Faisalabad and Nishtar Medical College in Multan staged a demonstration on Tuesday to express anguish and resentment at their examination results.

In Faisalabad, the students, who failed the recent examination, gathered at the PMC Chowk and raised slogans against the college administration. They also blocked traffic on Sargodha Road for more than three hours.

The students said some of the questions in their examinations had been out of their courses of study.

They said the issue was brought to the notice of the PMC administration, who they claimed, assured them that they would be given “special concession.”

Yet, they said the administration did not consider this and failed most of them.

Qasim, one of the protesting students, said, “Despite the questions being out of the syllabus, we attempted the paper on the assurance of the administration.”

Muhammad Saqib, another student, told The Express Tribune that when the students protested after the exam, the administration told them that the matter had been brought to the notice of the authorities. “We will not accept these results,” he said.

Another protester, Nadia Noor, said that she had never failed any exams in her entire academic careers. She said it was shocking for her and her family that despite hard work, she had failed. “It’s not that just the poor students who have failed. A lot of brilliant students did not pass. This is not a coincidence,” she said. She said seeing some poor students pass the exams, she suspected that they had bribed the examiners.

The protesting students chanted slogans against the PMC and appealed to the Punjab government to take notice of the situation. They demanded their papers be remarked to avoid speculations and save their academic career.

A PMC spokesman said that the administration was looking into the matter.

A similar demonstration was held in Multan, where Nishtar Medical College students took to the streets against “strict and biased” marking.

The students took out a rally from the college and marched towards the prime minister’s house. They also protested against the University of Health Sciences. The protest rally was led by Hassan Ali Jaskani, the Peoples Student Federation Nishtar unit president. Jaskani said more than 170 third year students had failed and demanded a fresh evaluation of the papers.

A Nishtar Medical College spokesman denied the allegation that the question papers were beyond the syllabus. He called the students’ protests “baseless.”