Labour minist­er asked what his depart­ment has done for worker­s in four years.
By Hafeez Tunio
Published: February 19, 2012
Tweet Email 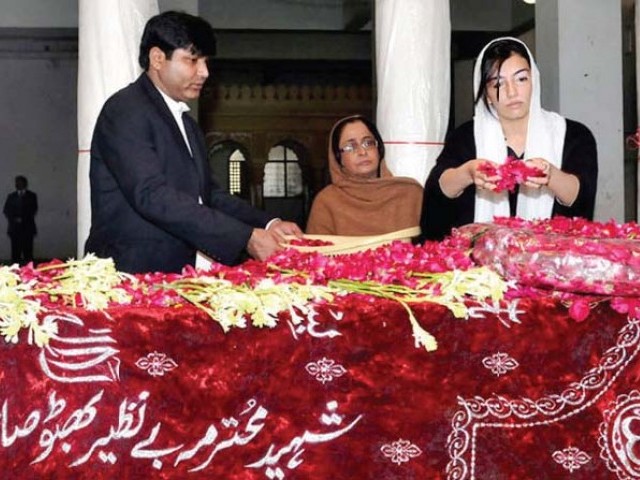 Aseefa Bhutto-Zardari showers her mother’s grave with rose petals in this file photo from January 1, 2012. She is Benazir Bhutto’s youngest child. PHOTO: FILE

As expected by many MPAs, Federal Interior Minister Rehman Malik excused himself from giving a briefing to members of the Sindh Assembly on Saturday on the findings of Benazir Bhutto murder investigation.

Malik was scheduled to arrive in Karachi on Saturday morning to brief the house, which had passed a unanimous resolution a few days ago demanding the federal government make the report public.

Normally, sessions are not convened on Saturday, but this one was called specifically for the briefing.  Malik said he was busy in a court matter.

A day earlier, Law and Parliamentary Affairs Minister Ayaz Soomo had said that they were facing immense pressure from the people of Sindh who had been demanding disclosure.  The report has held Baitullah Mehsud, the Taliban and the Haqqani network responsible for the murder.

Pakistan Peoples Party MPA Taimour Talpur said that now Tuesday has been fixed for the briefing but he was not sure whether it will happen. “[Rehman] Malik has already briefed the National Assembly about the report,” he said. “There is nothing wrong with him sharing the report with us.”

The registration of the labour force is expected to go up to 600,000 over four years, said Sindh Minister for Labour Amir Nawab in answer to questions on Saturday. About 0.25 million labourers, working in the private sector, have been registered during the last four years.

The labour department has received a share of Rs2.76 billion from the workers welfare department. The Sindh Employment Social Security Institute (SESSI) of the labour department also distributes grants to help labourers with family wedding expenses. When asked why SESSI was not following the rules for audits, Nawab said that an internal audit was held regularly.

Lawmakers expressed their apprehension about the worsening health of labourers working in private firms and industries. They were told that dispensaries are established on the basis of the industry or area where a minimum of 1,000 labourers exist.  The house was told that there were no specific laws in Sindh on improving the social and economic condition of contract labourers. No specialised medical care centre exists for beedi workers. However, they can be treated at any SESSI hospital across the province.

A total of 11,765 jobless persons were registered in the employment exchanges in Karachi from January 1, 2010 to December 31, 2011. The government plans to build a labour complex in SITE, Sukkur. The project is directly being executed by the workers welfare fund of Islamabad at an estimated cost of Rs1.6 billion.

In his response to a question from MPA Bilquees Mukhtar, Nawab said that a total of 3,337 children had been phased out of different industries such as carpet making and now they were being given education in government schools.

If a child has dyslexia, it means (s)he has a higher IQ – not a disease