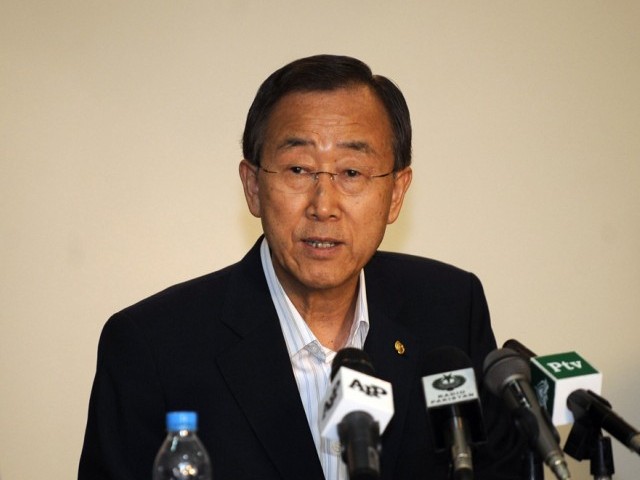 Any country opposed to signing or ratifying it is simply failing to meet its responsibilities, says Ban Ki-moon. PHOTO: AFP/FILE

VIENNA: United Nations Secretary General Ban Ki-moon made a new call Friday for the last countries that have not yet ratified the Comprehensive Nuclear Test Ban Treaty (CTBT) to let it enter into force.

“Any country opposed to signing or ratifying it is simply failing to meet its responsibilities as a member of the international community,” he said.

“It is irresponsible to see this treaty still waiting to come into effect 15 years after it was opened for signature.”

“I urge all governments that have not yet signed or ratified this treaty to immediately do so,” Ban added. “I especially call for action by the countries whose ratification is essential for the treaty to enter into force.”

The treaty bans nuclear explosions for either military or civilian purposes, and has so far been signed by 182 countries and ratified by 157 of them.

But it will not come into effect until it is ratified by the 44 key countries possessing nuclear technology. Thirty-six have done so but holdouts include the United States, China, Egypt, Iran and Israel.

India, Pakistan and North Korea have yet to sign the pact.

Since Ban made a similar appeal at UN headquarters in September, one key country, Indonesia, has ratified the agreement.

“The family of CTBT member states has grown to 182, 157 of which have ratified. The network has grown, station by station,” the head of the Vienna-based CTBT Organisation, Tibor Toth, said Friday.

Ban added, “Now we have only eight countries and I am ready to meet all these leaders and if necessary travel with Ambassador Tibor Toth to those eight countries who are still reluctant or may have doubts about the ratification of this treaty.”

The CTBT is seen by arms control advocates as a key measure for preventing the spread of nuclear weapons.

The unwillingness of the United States to ratify the treaty has been a key obstacle, with many analysts saying that US ratification would encourage other holdout countries to follow suit.

The CTBT also calls for a global system for monitoring nuclear explosions, which has been partially set up.

US congressman tables bill for Baloch right to independence