Challenges to media and democracy: ‘With freedom comes great responsibility’

Challenges to media and democracy: ‘With freedom comes great responsibility’ 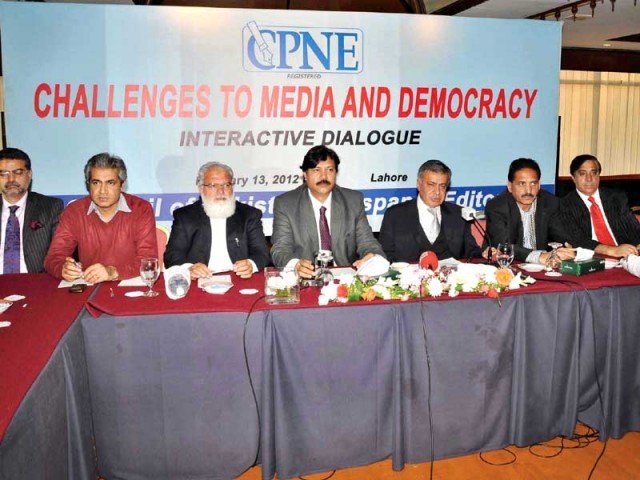 " The media is trying to replace the democraticallyelected PPP government with the poodles of dictators," PPP Secretary General Jahangir Badr.

While the media has become freer, there are still no-go areas like the military establishment and minorities issues that need to be opened up to press scrutiny. At the same time, the media must develop better ethical and information-gathering practices to ensure it strengthens democracy rather than weakens it.

These views were expressed by speakers at an interactive dialogue on ‘Challenges to Media and Democracy’ hosted by the Council of Pakistan Newspapers Editors (CPNE) at Avari Hotel on Monday.

Arif Nizami, the editor of Pakistan Today, said the PPP government had faced media criticism amicably. He said the judiciary was “probably the real ruler” of the country at present and the responsibility of the media in the current situation had increased. He suggested that the judiciary was tougher on the government than its intelligence agencies. The court was pursuing a case against the prime minister, but its commission set up to investigate the killing of journalist Saleem Shehzad had been toothless. “If the agencies were not involved in this case, why were they unable to expose the killers?” he asked.

Imtiaz Alam of the South Asia Free Media Association said that the press and democracy were inseparable and both must be sustained to build a healthy country. “The question is, how do we maintain the freedom of both in the backdrop of our experience with martial law and dictatorship?”

Alam said that the media was free to report on political institutions, but not the military establishment. There are other groups reporting on which involves risk, he said, mentioning the Muttahida Qaumi Movement in Karachi and militant groups in Khyber Pakhtunkhwa and Balochistan.

He said that the emergence of independent electronic media had been an important development for Pakistan, but it had also resulted in a lower quality of journalism. New channels had become judges, passing premature and unfounded verdicts on people. He said that the media needed to develop a code of ethics and a mechanism for self-accountability.

Pakistan Peoples Party (PPP) Secretary General Jahangir Badr said that the media had credibility issues. “It is not showing the true picture to the people,” he said. “Awareness and impartiality should be the cornerstone of media. That is the way to nurture democracy.”

He accused the media of trying to replace the democratically-elected PPP government with “the poodles of dictators”. He said the media was ignoring important issues like feudalism, which had excluded the middle class from the democratic process.

Mubashar Lucman, a talk show host on Dunya TV, said that Pakistani society was deeply polarised. “You cannot conduct a programme on Mumtaz Qadri, no matter what your point of view,” he said. ‘The channel’s management would kick you out. This polarisation hinders media from speaking about the rights of the minorities.”

He said that on television, presentation was often deemed more important than content. “Live coverage has proved a curse in some cases as there are no checks and balances,” he said. He said social media was gaining ground but there were no checks on what was put on Twitter and Facebook.

Ayaz Khan, the coordination editor for daily Urdu newspaper Express, said there were still plenty of no-go areas for reporters, such as FATA. The first reports of drone attacks usually come from the Western media, he noted. He said there was an urgent need to frame rules for the security of reporters and cameramen.