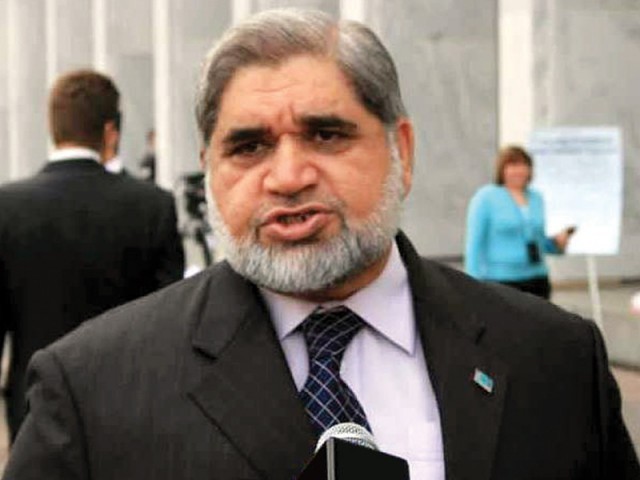 The Memogate commission again directed the foreign secretary and attorney-general of Pakistan to write to BlackBerry manufacturer Research in Motion (RIM) for data from the handsets allegedly used by Mansoor Ijaz and former ambassador Husain Haqqani.

The commission has asked for a report by Friday morning (today).

Chief Justice Qazi Faez Isa of Balochistan High Court, the head of the commission, admonished Foreign Secretary Salman Bashir and Attorney General Maulvi Anwarul Haq for concealing the fact that the Canadian High Commission in Pakistan had refused to forward a request from Islamabad to RIM to provide the Blackberry data.

Justice Isa questioned if the respondents “did not understand English” and said that the commission had clearly stated that all the documents relevant to the case be submitted to the court, and by not doing so, the government has violated the court’s orders.

The commission observed that if the government continued doing so then the Defence Secretary Nargis Sethi will be asked to attend every hearing of the commission.

Justice Isa then summoned Bashir for an explanation, asking him: “Do you feel proud as a Pakistani today? … There must be a treaty between the countries to deal with such issues. What do you do when they ask you for the same favours?” He added that the government should write directly to RIM.

Akram Sheikh, Mansoor Ijaz’s counsel, informed the commission that he had established contact with his client and Ijaz apparently informed Sheikh that RIM has provided him with his call log.

Sheikh said the commission has the power to direct Haqqani to surrender his Personal Identification Numbers (PIN) so RIM could provide data. Zahid Bukari, counsel for Haqqani, contended that he will only surrender his PINs when Ijaz records his statement before the commission.

Sheikh made an interesting submission when the commission’s head again remarked that if his client had appeared the entire case would have been completed by now. “If I tell the real story, it will jolt the political environment in the country,” Sheikh said.

Earlier, Sheikh told the commission that his client would not come to Pakistan but he is willing to appear to record his testimony and hand over his gadgets to the High Commission in London.

Sheikh expressed his client’s fear that the moment the parliamentary committee on national security will stop him from returning home.

Justice Isa asked him to guarantee that, if the commission travels abroad, his client will appear to give his testimony, but Sheikh refused, though he did say his client is eager to appear before the commission either in London or Zurich.

The AG said that he will not advise the commission to travel abroad as Ijaz is unreliable and if he does not appear before the commission, it will be an insult to Pakistan. The commission agreed with the AG, pointing out that he had refused to come to Pakistan despite assurances of security measures. The commission admitted, however, that if they don’t cross-examine Ijaz, their findings will remain inconclusive.

The AG also told the commission that notices were served to James Jones and Admiral Mike Mullen, who have refused to appear before the commission.

Barrister Zafarullah had wanted to press the commission to summon the ISI chief, who had met Ijaz in London, but due to a shortage of time the commission adjourned the hearing till Friday morning.