‘An Islamic revolution will break up Pakistan’

‘An Islamic revolution will break up Pakistan’

Anatol Lieven speaks about the quanda­ry Pakist­an is in.
By Aroosa Shaukat
Published: February 7, 2012
Tweet Email 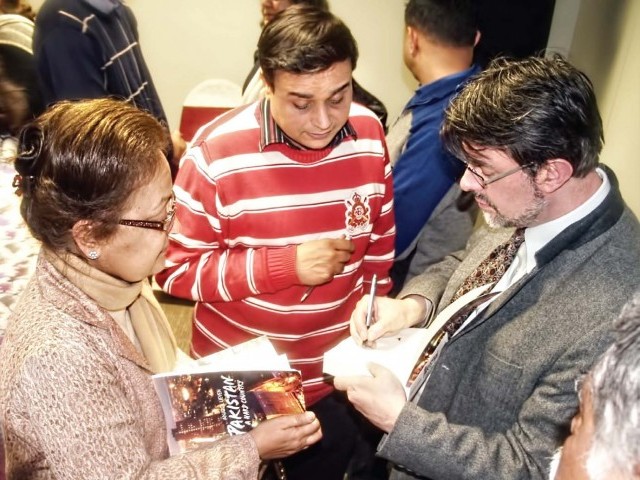 Audience members approach Anatol Lievin to get a signed copy of his book, Pakistan: A Hard Country. PHOTO: ABID NAWAZ/EXPRESS

“Drama sells beautifully,” said Anatol Lieven, “You see a headline, ‘Pakistan on the edge of destruction’ it does wonders for selling the news. Lieven, a British journalist, was speaking with The Express Tribune at a talk organised by the Oxford University Press regarding his latest book, Pakistan: A Hard Country. Lieven admitted that the ‘West’ is not that well informed about Pakistan and those journalists who were relied on for information also liked their drama.

“No matter how angry the Pakistani government is with the US,” he said, “it is imperative for both to continue real and public cooperation.” Lieven does believe that the government had no clue about Osama Bin Laden’s presence in the country but said he was not sure about the military or intelligence. Conspiracy theories, he said, were rife in Pakistan and could be infuriating. “No one knows who killed General Ziaul Haq. But we all do know that he was killed.”

Calling the US’s decision to send troops during the May 2 raid in Abbottabad last year a ‘bad idea’, Lieven said there was some awareness in the UK and in ‘sensible’ quarters of the Washington establishment about the intrusive nature of that raid. However, he said after the Bin Laden discovery, it was difficult to maintain much of a stance against raids.

Lieven is more concerned about how the US would respond in case a terrorist act carried out in the US is traced back to Pakistan. “The reaction by the US government would be disastrous.” With the mood in the US Congress and on the street turning highly sceptical over the years, Lieven said post 9/11 even the most moderate quarters had lost their reasonableness. “The US congress is not a very sophisticated force. They are very easily provoked,” he said.

Explaining title of his book, Lieven said Pakistan was a resilient country that had over the years faced hard challenges. Lieven believes that though Pakistan was facing its toughest crisis yet, it had always survived. He said the country had bounced back from the ‘increasingly dangerous’ situation in Swat as well as from the aftermath of the recent floods.

Lieven also warned against blaming the West alone. “We cannot deny that there are certain elements in Pakistan that hold a sympathetic view of the Afghan Taliban,” he said, “and resist US policies.”

The author, who has worked for The Financial Times and is currently a professor of international relations and war studies at King’s College in London, has written six books. Lieven said an Islamic revolution in Pakistan could disintegration of the country. “People talk of the Arab Spring in Pakistan,” he said, “Though with its democratic character – no matter how flawed- Pakistan is very different from the Middle East.”

“I have received criticism for being too soft on the military,” he said during the talk later, “but it is unfair to say that the military or the government are doing absolutely nothing,” he said.

Lieven said that in his opinion the military was the only institution in Pakistan that ‘works’, but that did not imply that the military could take over the state. “I hope one thing is clear from my book,” Lieven said, “as far as civil rights, education and boosting the economy is concerned, I am with the liberals – how one gets there is another thing.”

Eid Milad: 7 injured in firing during procession in Gujranwala