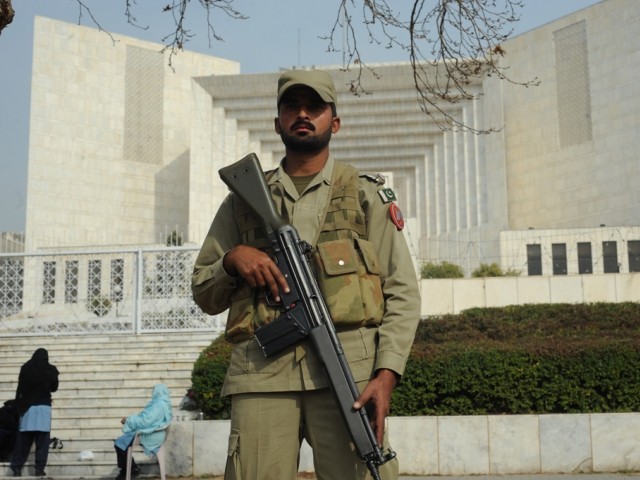 A paramilitary soldier stands guard outside the supreme court building during the corruption case hearing in Islamabad on February 2, 2012. PHOTO: AFP

ISLAMABAD: The government has decided to file an appeal for review of Supreme Court’s (SC) decision on contempt of court case against Prime Minster Yousuf Raza Gilani , Express News reported.

The decision was taken on Thursday during Pakistan Peoples Party’s (PPP) core committee meeting, in which Barrister Aitzaz Ahsan briefed the government about all the details related to the case.

Earlier in the day, the SC concluded its hearing of the contempt case against Prime Minister Gilani and summoned the premier on February 13. The court said that it will frame charges against the prime minister during the hearing.

“After the preliminary hearing, we are satisfied prima facie that there is enough case for further proceedings,” announced the court.

During today’s hearing, Barrister Ahsan strengthened his argument by presenting Chief Justice Iftikhar Muhammad Chaudhry’s earlier order which stated that the prime minister is obliged to take advice in all matters before taking any decision.

Ahsan had stressed in the last hearing that Gilani did not take the decision of not writing the letter to Swiss authorities himself, but was instead advised to take the step.

He argued that following the chief justice’s earlier order, Gilani was supposed to seek advice from the Law Ministry and the Human Rights Division before taking any action, and the advice he received in the NRO implementation case was not in favour of the court’s decision.

“In any civil or military issue, the government has to consult the Law, Justice and Human Rights Division,” he remarked. “According to the Rules of Business 1973, the prime minister should have consultations before taking any decision.”

Justice Nasirul Mulk, heading the nine-member bench, remarked that the premier was efficient in listening to the Law Ministry and the Human Rights Division, but did not give due consideration to the court’s orders. “The prime minister has the right to turn down Law Ministry’s advice,” Justice Athar pointed out.

The court said that if Ahsan ensures that its order in the NRO implementation case is followed, then the contempt case will be closed; however, Ahsan did not provide any assurances.

In a surprising revelation, Ahsan presented to the court a summary from September 23, 2010, which stated that there were no cases against the prime minister and the president in Switzerland.

He told the court that the Swiss authorities wrote a letter to Pakistani authorities asking for evidence, in reply to which, the government assured them that all the cases were closed in the country owing to the NRO.

The Swiss authorities closed the cases on lack of evidence, said Ahsan.

The court expressed surprise over the summary and asked why it has never been presented in any of the previous hearings, adding that if the cases are closed, then why is the government afraid of writing the letter.

The government should write the letter for our satisfaction, and then we will see what the Swiss authorities have to say in reply, the judicial bench maintained.

Ahsan also questioned the court that if it can send notices to Bhutto, Nawaz Sharif and Gilani, then why it can’t initiate any action against the generals who were involved in arresting the judges.

Saving the court from embarrassment

Ahsan remarked that he wants to save the court from embarrassment, which can happen if a letter is written to the Swiss authorities.

Justice Asif Saeed Khosa responded to the statement by saying that Ahsan is fine with the court being embarrassed inside the country, but claims to save it from embarrassment internationally.

The bench said that a letter should still be written as the court does not care about the consequences.

Ahsan, while talking to the media after the hearing, said that there is “definitely” an option of filing an appeal against the court’s decision.

“My advice to my client would be to file an appeal, but the decision rests with him,” he added.

He emphasised on his earlier stance that the show cause notice issued to the prime minister should be discharged. The prime minister, he said, acted upon the advice of the law minister and law secretary – which was sent in a written form – and thus, did not commit any contempt of the court.

He stressed that he wants democracy to prevail in the country and wants the clash of institutions to end.

Insult and honour: Tribal predators hunting down newlyweds in Karachi