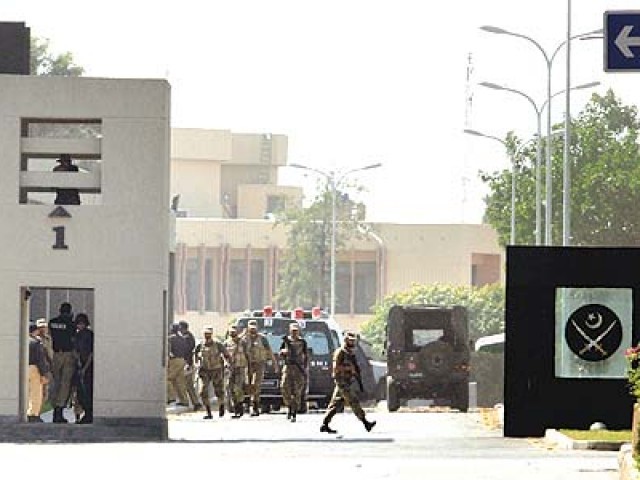 Lawyer says prisoners died in hospital due to illness, ready to have their postmortem done. PHOTO: AFP/FILE

ISLAMABAD: The Supreme Court ordered Military Intelligence (MI) and the Inter-Services Intelligence agency (ISI) on Monday to produce the prisoners who had disappeared from the Adiala Jail earlier before the court.

Eleven prisoners, convicted for attacking the Pakistan Army’s General Headquarters in Rawalpindi and the ISI’s Hamza Camp, had gone missing from the jail, and four were later found dead.

Lawyer Raja Irshad, on behalf of the MI and the ISI, submitted reports in the court today, which said that the death of four prisoners occurred due to poor health in the Lady Reading Hospital (LRH).

The report added that four other prisoners are in a critical condition and are under treatment in the LRH while three are in Parachinar in an investigation centre.

Irshad told the court that he can bring the four prisoners, currently under treatment, before the court only if the hospital allows him.

Chief Justice Iftikhar Muhammad Chaudhry said that the prisoners were picked up by the agencies and should now be brought before the court.

Irshad sought more time from the court to file a detailed reply, but the chief justice ignored the request.

The three-judge bench, headed by the chief justice, had served notices to the ISI and MI chiefs on January 25 to explain the circumstances behind the deaths.

Irshad, while talking to the media, said that the agencies were ready to have the postmortem of the dead prisoners done and to hold a forensic inquiry.

The hearing of the case was adjourned till February 9.