Lobbying: US lures Pakistan with cheaper gas than Iran

Lobbying: US lures Pakistan with cheaper gas than Iran 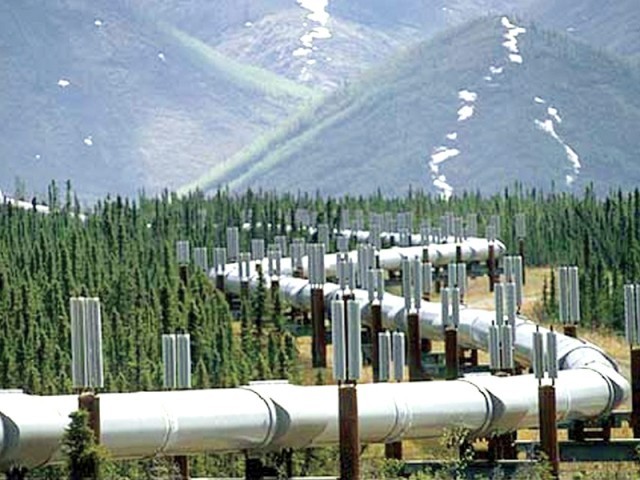 A view of the winding Pak-Iran pipeline. PHOTO: FILE

They may loathe you for being ‘duplicitous’ in the war on terror, but they will gladly sell gas to you – especially if it means you will give up gas from Iran.

The United States has stepped up efforts to lobby Pakistan to abandon the Iran-Pakistan (IP) gas pipeline, and Liquefied Natural Gas (LNG) imports from Iran. What’s on offer? Cheaper gas from US.

US embassy officials held a meeting with stakeholders from the power and energy sector last Tuesday to seek input on Pakistan’s current LNG import and IP gas pipeline projects.

Iranian gas will not be affordable for Pakistan, a participant from the meeting quoted US embassy officials as saying.

Iranian gas will cost $12 per million British thermal units (mmbtu) while LNG would cost $18 per mmbtu, the officials said, adding that the Turkmenistan-Afghanistan-Pakistan-India (TAPI) gas pipeline was the most viable option for Pakistan financially.

Minister for Petroleum and Natural Resources Dr Asim Hussain is presently in India to negotiate the transit fee for TAPI.

US officials expressed concern regarding the current gas crisis in Pakistan, and even asked the stakeholders for suggestion on how the US could help, but made no direct offers to bring LNG to Pakistan, sources said.

The main focus of the discussion was the TAPI gas pipeline and cheaper LNG imports, they added.

Sources said that officials from United States Agency for International Development (USAID), at a meeting at the petroleum ministry, had indicated that LNG could be made available at$4.5 per mmbtu.

When contacted, Secretary Petroleum Ijaz Chaudhry said that US has made no offer to provide LNG, but added that USAID gave a briefing two months ago on the historical trend of LNG prices in the world market.  The price of LNG was $4.5 per mmbtu four to five years ago but shot up due to rising LNG demand in Japan following the earthquake, he said, quoting US officials.

According to Wall Street Journal, American energy companies have increased gas supply to the point that prices have started to plummet. Natural-gas prices fell 5.7% on January 12, 2012 to their lowest level in over two years. Despite a 32% drop in prices, on-shore production rose 10% last year and is expected to rise another 4% this year, according to Barclays Capital.

The US has six billion cubic feet of surplus gas per day that could be exported, an energy expert said, adding that further reserves of shale gas have also been discovered.

The US has potential to export LNG and is setting up two to three LNG terminals to start exporting possibly in 2015, the expert said.

He added that price of gas in US is around $4 per mmbtu and its transportation from US to Pakistan would add between $3 and $4 per mmbtu, the expert added.

The expert did caution though that in all likelihood, Pakistan would have to pay prevailing market rates in the region.

The US may move to export cheaper LNG, however, in order for Pakistan to abandon the IP gas pipeline project, he added.

No-go areas: Afaq told to take up plea with SHC