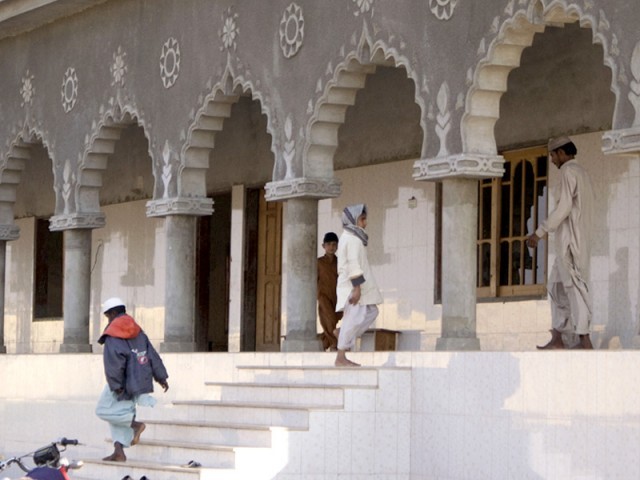 The mosque of Bait-ul Islam seminary in Matli, where many families live after converting to Islam. PHOTOS: AYESHA MIR/EXPRESS

Money, jobs and a debt-free life: It sounds like a sweet deal for many of the Hindu labourers in Matli, but it comes with strings attached — convert to Islam.

Hundreds of Hindus in the area have converted to Islam in the past few years, courtesy seminaries, mosques and self-styled preachers.

Switching religions comes with an upgrade in social status and material benefits – Hindu converts said they could easily get Watan Cards and National Identification Cards, aid, and were given land and assistance by the organisation helpfully walking them over to the other side.

But these material benefits aren’t available for everyone. For the Hindus of the Bheel caste, who were converted by the Barelvi group Tanzeem Ulema-e-Islam, life is still restricted to the land that they are squatting on in Tando Mohammad Khan.

Abdul Hameed, who was once known as Pyaro, still works as a labourer and earns a pittance. He was converted by Maulana Taj Mohammad Kamboh via an introduction by Jan Mohammad, a small-time landowner who has been ‘preaching’ to Hindus for almost 15 years.

Jan Mohammad is insistent his proselytising isn’t tied to material benefits. “We did not want to publicise this. I just want these families to get Watan Cards or some money,” he says. “We were told by the National Database and Registration Authority in Matli that it would be easier to get this done if these people were Muslims.”

The same motivations are cited by Maulana Taj Muhammad Kamboh who has been playing a leading role in the conversions. “They had no place to live in,” he told The Express Tribune. “I am trying to get a plot for them and will construct houses for them with the help of my friends. I don’t want to see them as beggars.” He insists that now that they are Muslims they should live their lives according to their own will. “We will not impose anything on them,” he adds. “They are also free of any sect.”

The converts shrug. When their minders are out of earshot, they say their life hasn’t changed much. Pyaro, for example, points out that he was already following many Muslim practices and as far as being a Hindu was concerned, he had never been to a temple or studied any of the religious texts. “Our nikahs were conducted by a Muslim. We ate chickens slaughtered by a Muslim.” His relatives in Mirpurkhas and other districts in Sindh have also converted to Islam, and had encouraged him and his wife Nazira (formerly Koraan) to also convert.

Another convert, Abdul Rasheed (previously known as Haroon), pointed out another advantage. “Now there is no difference between our friends’ traditions and culture,” he says, admitting, however, that it will take time to learn the ropes. But here too, the underlying economics surfaces: “We need a permanent shelter now and without that it would be hard to concentrate on the new religion.”

In order to press them in this direction are men like Hafiz Asadullah Memon, who heads the Tanzeem Ulema-e-Islam in Matli. He wants them to start saying their namaz regularly and reading the Quran.

Seven children from the converted families are now being taught basic religious lessons at a mosque on the property. Seven-year-old Aziza, who is being schooled at the Deedar-e-Mustafa mosque, rattles off the Kalima. “Yes, we are Muslims now but my friends still call me by the same name, Appi,” she says. “I remind them again and again that my new name is Aziza.”

The young boys wander around the plot in their new green prayer caps. “These children study happily,” says their teacher Hafiz Mashooq Ali. “I don’t hit them or anything.”

With new Muslim names and a vow to adopt religious rites, they are only hoping that someone will be impressed enough to offer them land and social security.

These desires have been fulfilled at the Madrassa Baitul Islam, a Deobandi seminary in Matli which meticulously maintains a log of the conversions. The first entry is dated November 1, 2009. The most recent is December 22, 2011, when they converted the 428th Hindu to Islam.

The seminary – which has received kudos from religious-political parties including the banned Sipah-e-Sahaba Pakistan and is affiliated with the Darul Uloom in Karachi – also pays off the debts of Hindus converting to Islam. Based on the entries in its records, this can range from a few thousand rupees to over Rs50,000.

The Bheels who live in the lower parts of Sindh, including Tando Muhammad Khan, Umerkot, Mirpurkhas, Tharparkar, Badin and Thatta, are considered to be peace loving and humble, and are rarely found involved in crime. “We don’t have money or land, so what would we fight with anyone over or who would make enemies of us? We have to do our own work,” explains Allah Bux Shaikh, a fresh convert in his mid-30s.

In a classroom, dozens of children rock back and forth as they recite the Holy Quran, and Ali Ahmed, a Hindu convert, is brought out as a model student. He has already memorised five Siparas of the Holy Quran and aims to become a hafiz. “His family will get a stipend of Rs200,” seminary teacher Qari Abdullah tells The Express Tribune. Students, including converts and Muslims in neighbouring areas, are provided lodging and expenses.

The register also notes the caste of the converts, as well as how much of their loan has been paid off. A newly converted family is given Rs5,000 as well as a copy of the Holy Quran, and housing for three to four months. During this time, they are given a religious education and taught how to live their life according to the Islamic code. There is an on-call doctor and a hospital on the premises and an ambulance is available to move serious patients. Another seminary in the city educates female converts.

“When we were Hindus, we were nothing,” say converts Khan Mohammad and Hawa Bibi. But as they begin to share about how their life hasn’t really changed, two Muslims walk in, and they fall silent.

Change is the vote: KTN CEO teams up with Marvi Memon to launch party