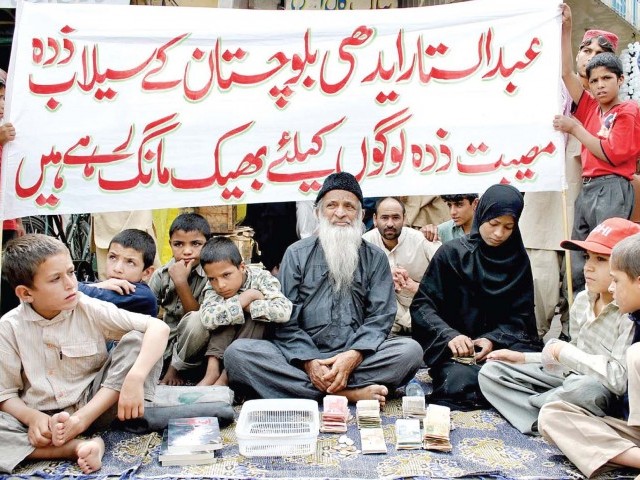 QUETTA: At least three people – including two children – were killed while five others suffered injuries when heavy rains hit the already flood-affected districts in Balochistan on Wednesday.

Babo, nine, and Fariza, five, were killed in Ghot Pyara Khan Umrani, a village in Usta Mohammad, when their mud house collapsed. Three others received injuries in the incident. A man died in Dera Allahyar while two others, including a woman, suffered multiple injuries when their house collapsed due to the downpour. The injured were taken to the district headquarters hospital for treatment.

The rain started late night on Tuesday and continued till Wednesday evening in Sibi, Jhal Magsi, Dera Murad Jamali, Subhatpur, Dhaddar, Jaffarabad, Naseerabad and other adjoining areas. Several villages were submerged forcing people to take shelter on higher grounds and on the roofs of their houses.

The water discharge of Nari River was recorded at 1,500,000 cusecs, posing a threat of flash floods to the nearby villages of Sibi and Dhaddar.

However, railway services were restored in Balochistan, after a disruption of seven days, as trains left for Karachi and Rawalpindi on Wednesday morning. Power supply in Dera Murad Jamali and nearby villages remained suspended.

Director General Provincial Management Authority, Hassan Baloch, told The Express Tribune that relief works have started and the administration will leave no stone unturned for the rehabilitation of affected villages.

He added the government cannot as yet estimate the losses as they are busy in relief operations.

Locals criticised what they termed insufficient relief operations. “The hospitals are crowded with patients,” said Shafiq Ahmed Domki from Baktiarabad via phone. He said that people were not getting relief goods and claimed that dozens are still marooned in Wazirabad village, situated near Baktiarabad. Locals of Jaffarabad also complained about insufficient relief operations.

The situation in Kohlu and Barkhan is stated to be better as relief goods and medicines were being distributed properly among the affectees. However, victims demanded help for the reconstruction of their houses.

Provincial Minister Communication and Works, Sadiq Umrani, also expressed dissatisfaction over the relief operations, saying that he had informed chief minister Balochistan as well as the chief secretary to expedite the efforts.

“I have spent three days in Naseerabad and did not see any relief work,” he said. Talking to the media, he appealed to the federal government and international donor agencies to help the affectees.

Philanthropist Abdul Sattar Edhi initiated a begging campaign in Quetta on Wednesday for the relief of flood victims. He, along with his daughter, started the campaign from Mizan Chowk.

Talking to the media, Edhi said that around 5,000 flour sacks have already been sent to the affected areas. He added that he will distribute cash among the victims in the second phase of the campaign and appealed to people to come forward to help flood victims.