The politics of a dysfunctional state

The politics of a dysfunctional state 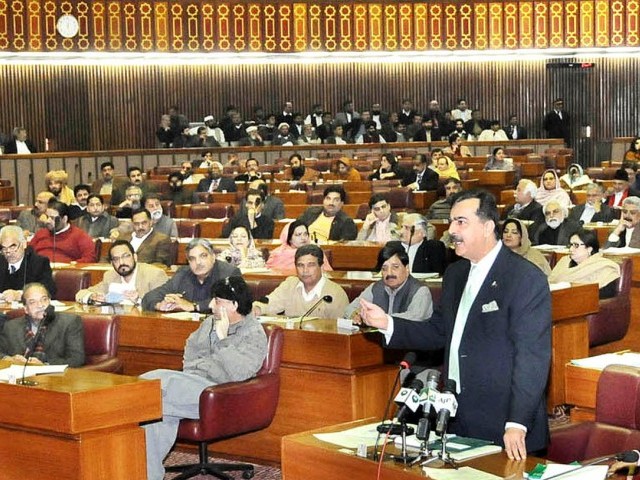 On Jan 13, the NA heard the text of a resolution saying that the house supported the basic constitutional principle of trichotomy of powers. PHOTO: INP

On January 13, the National Assembly heard the text of a resolution saying that the house supported the basic constitutional principle of trichotomy of powers — “in which parliament is regarded sovereign and above the executive and judiciary” — and reposed “full confidence and trust” in the country’s political leadership. The house will vote on it on tomorrow when the deadline given to the government for acting on the verdict of the Supreme Court in the NRO case also falls. The ruling coalition has a large majority in the National Assembly — and claims that it is actually two-thirds — but it is not certain if the PPP’s partners in government will stick by it all the way in its broad-front stand-off with the judiciary, the army and the opposition led by the PML-N. Many sections of the media remain hostile to the PPP-led government and people in the street, tortured by the fast-dwindling infrastructure of the state and a collapsing economy, also want to see it gone for good.

Prime Minister Yousaf Raza Gilani is in the eye of the storm although it is President Asif Ali Zardari who seems to be the target. The Supreme Court is hearing the memogate case and a bad decision for the government could see the president being implicated in it. In addition to this, the NRO case is closing in on the president as well since the apex court has asked the government to write a letter to revive a money-laundering case against him a court in Switzerland.

No one is immune to criticism. The Court, universally applauded for its independence since its restoration in 2008, is being reprimanded by a section of the legal community for being excessive in pursuit of judicial activism and for encroaching onto matters that are the exclusive domain of either the executive or the legislature. Indeed this negative trend is sharp-edged and attracts the penalty of contempt of court but it gives us a measure of how divided the national opinion is. The army is similarly warned against doing anything in the past tradition like overthrowing the government. The constitutional principle that each government enjoying a majority in parliament must be allowed to finish its five-year tenure is under challenge in this chaotic situation.

The opposition, led abrasively by the PML-N, wants an early election which seeks to interpret the sixth option presented by a five-member bench of the Supreme Court, which speaks of letting the people decide the issue, a euphemism for another election. It wants early polls brought on by Prime Minister Gilani dissolving the National Assembly under pressure from the rising political storm. The opposition wants President Zardari out of office and a caretaker government in place immediately so that elections can be held without letting the PPP achieve a majority in the Senate in March — which it is expected to, given its current electoral strength. The opposition comprises the elected one led by the PML-N and an unelected one led by the PTI, but both are also at loggerheads with each other, further confusing the political battlefield in the country.

If inside Pakistan the armies of political difference are fighting in the dark, outside too the government has abdicated to the military — in the latter embracing an isolationist path. If US aid stops it may not hurt much but if the rest of the world including the multilateral lending institutions button up, the situation will become dire given that foreign aid finances the bulk of the country’s development budget. Whoever comes to power next will find it impossible to run the economy brought to its knees by a debt overhang and large fiscal and trade deficits.

We don’t know how we will finance the five-billion dollar budget of the military which is fighting manfully not only against the combined power of the US, India and Israel — if some establishment analysts are to be believed — but also the Taliban terrorists addicted to killing our innocent population in a war that many Pakistanis unfortunately think is ‘not our war’. What is going on is the politics of a dysfunctional state on the bases of a series of ‘national consensus’ issues which no one outside Pakistan considers realistic.