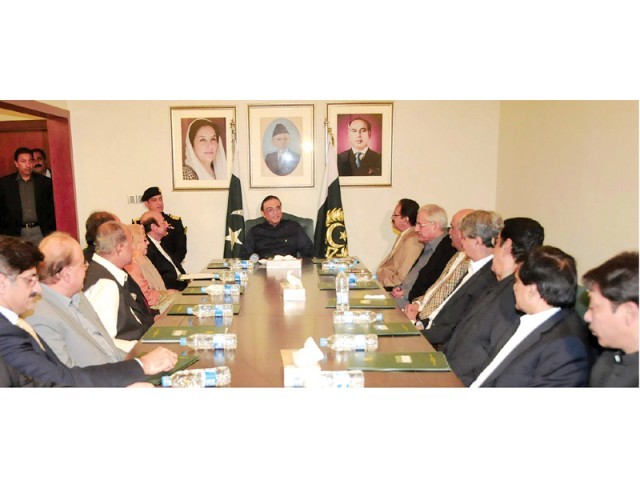 Political masquerades should know that their conspiracies cannot topple the Pakistan Peoples Party government which enjoys the people’s support, said President Zardari while chairing a meeting of senior members of his party at Bilawal House in Karachi on Monday.

“I respect the judiciary and will continue to do so,” the president said and warned that clandestine efforts to trigger a clash between state institutions were doomed. He was referring to divergent approaches vis-à-vis Memogate scandal which has created an impression of confrontation between the judiciary and the executive.

President Zardari credited his party’s government for the ‘restoration of the 1973 Constitution in its original form’ and said that the Constitution defines the functions of all state organs.

He promised that next year’s budget would be people-friendly and that the government would try to tackle the energy crisis on a priority basis for fast-paced economic growth.

Zardari is expected to leave for Dubai in the next 48 hours. A spokesperson for Bilawal House was quoted by the media as saying that the president was expected to fly to Dubai on Wednesday to attend the Valima reception of the son of one of his friends. He will return home the same day.

Earlier, the meeting of members of the Central Executive Committee (CEC) belonging to Sindh formed a six-member board and tasked it with making nominations from Sindh for the upcoming Senate elections. President Zardari himself will oversee its work.

The participants were informed that the Senate elections, scheduled for March this year, could be held in February, sources told The Express Tribune. And aspiring PPP candidates from Sindh were asked to submit their nominations.

PPP leader Faisal Raza Abidi confirmed that several aspirants filed their nominations during the meeting. “We will consult our coalition partners before fielding our candidates,” he told the media after the session.

A handout issued from the Bilawal House said that the meeting discussed the security situation in the province and issues of the coalition government.

Out of six MQM senators, three are retiring in March. The party has convened a meeting today (Tuesday) to consider nominations. Sources said that a high-level meeting between MQM and President Zardari is also likely today wherein the issue of Senate elections would be discussed.