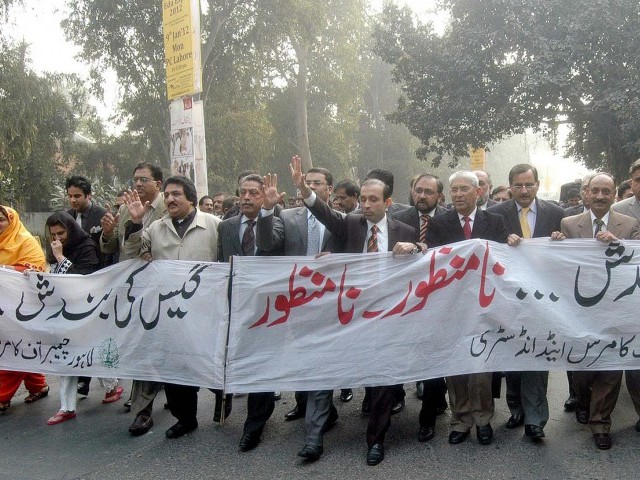 Members of Lahore Chamber of Commerce and Industry (LCCI) protesting against Sui gas loadshedding during a demonstration outside Punjab Governor House on Monday. PHOTO: PPI

LAHORE: Chambers of commerce in Punjab finalised arrangements on Thursday for their scheduled sit-in on January 7 against the prevailing gas shortage in the province.

The protest was sparked by, what they called, the federal government’s discrimination against the province in natural gas supply.

According to the protest plan earlier announced on January 2 by Lahore Chamber of Commerce and Industry (LCCI) president Irfan Qaiser Sheikh, around 50,000 to 100,000 industrialists, traders and industrial workers would be participating in the sit-in.

Sheikh had said that presidents of all the Chambers of Commerce & Industry in Punjab and their Executive Committee Members were going to take part in the protest, adding that it was the government’s discrimination against the industries in Punjab that had forced the business community to take this extreme step.

He added that if the government remained unmoved after the sit-in, a call for a protest in Islamabad would also be given. Sheikh reiterated that the entire industry was in deep trouble and thousands of workers were going to lose their jobs.

The defiant LCCI president said that businessmen would not be intimidated by FIRs registered against and that they would continue their struggle until their genuine demands were accepted in the larger interest of the economy and the country.

Earlier on Monday a case has been registered against Sheikh and other representatives of traders on charges of creating public nuisance after they blocked a road.