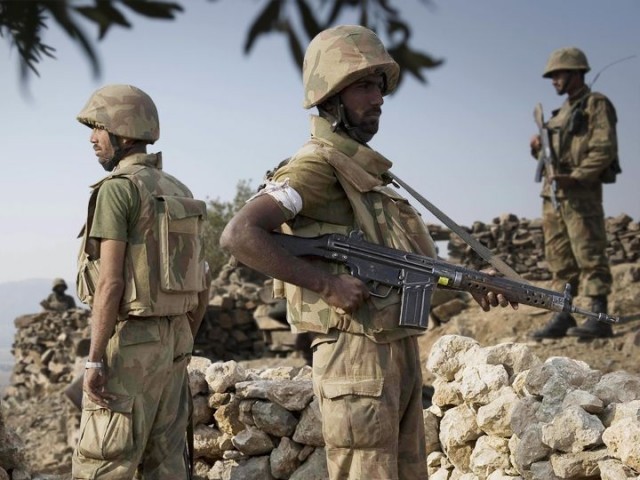 PESHAWAR: To fight the militants, security forces launched an offensive in Bara tehsil of the Khyber Agency in June 2008 called ‘Sirat-e-Mustaqeem.’

Since then, a total of five military operations have been conducted with the fifth, ‘Khwakh Ba De Sham’ (I’ll teach you a lesson) still under way.

According to commanders of the Frontier Corps (FC), the region is now fully under control of the security forces.

However, elimination of militants from the area still requires massive public support, according to FC officials.

An official of the security forces, while talking to The Express Tribune, also said that the presence of the Tehreek-i-Taliban Pakistan (TTP) could not be ruled out in the agency. According to him, intelligence gathered by the agencies proved that Lashkar-e-Islam (LI) had significant links with the TTP.

Briefing the media at Fort Saloop in Malakdin Khel area of the Khyber Agency, Operation Commander Colonel Fawad asserted that about one million people reside in the area and for the operation to avoid civilian casualties, residents of Sipah along with Malakdin Khel tribes would have to leave.

“Militants try to target forces. They fire mortar shells and do not bother where these land. As a result, civilian casualties occur,” he asserted pointing out that the LI takes benefit of the presence of locals.

Peace committees established by Akakhel and Zakhakhel tribes had been supporting the forces, according to Colonel Fawad, who maintained that a total of 18 check-posts had been established in the area which had significantly dampened militant activities in the area of the two tribes.

When questioned about the prospects of the Internally Displaced Persons (IDPs) returning to their homes, Colonel Fawad asserted that will happen as soon as the area was cleared of militants.