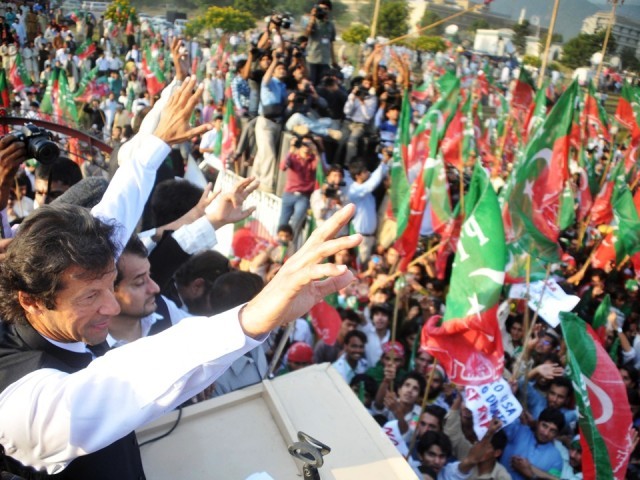 Party chairperson Imran Khan was informed about the issue and he had reportedly spoken to the authorities. PHOTO: QASIM USMAN/FILE

KARACHI: On a high after celebrating the arrival of Pakistan Tehreek-i-Insaf (PTI) chief Imran Khan in Karachi on Thursday night, PTI workers were in for a disappointment when they arrived at the rally site on Friday morning to find it closed.

It was reopened later on in the morning. The venue was reportedly closed by the security administration of the Mazar-e-Quaid. According to a security guard, Sabir, “Our security supervisor told us to lock the gate. There were about five of us who started our shift at 7 am. The gate was closed at 8 am.” A copy of the Sindh High Court’s (SHC) ruling on December 21 was also placed on the gate.

PTI workers inside the venue were told to leave. As media personnel converged on the site, police officers from a nearby station arrived to inquire into what happened.

Imran Ismail, the deputy secretary general of the PTI, told The Express Tribune that this was an “attempt by the federal government to slow us down.” Party chief Imran Khan was told of the development and directed PTI to calm its workers down while he helped sort the issue out. A few hours after the gate was locked, the security administration reopened it.

According to Ismail, the SHC ruling – which disposed of a petition over the rally site – did not disallow PTI from holding their event. He said that the Quaid-e-Azam trust had given them permission again as well.

“This will be the largest rally in history,” Ismail predicted. He said they had not faced any issues with coordinating with the police or administration prior to today, as the party has been working on the site since the second week of December. He did say that there were problems before PTI’s October 30 rally in Lahore. “Since the Pakistan Muslim League (Nawaz) had held a rally in Lahore prior to ours and had broken all rules and put up posters and banners”, Ismail said, PTI was able to hold its event. “They gave us Minar-e-Pakistan as a venue because they thought we wouldn’t be able to fill it. And that space wasn’t enough for us.”

It is hard to estimate how many people can fit into the December 25 rally site. A police officer estimated that there was space for up to 500,000 people.

Additional chief secretary for the home department Waseem Ahmed also visited the site to survey it on Friday morning. The police were reportedly developing a security plan for the rally on Friday.