Sons recall how he gave all of them a free hand.
By Sohail Khattak
Published: December 23, 2011
Tweet Email 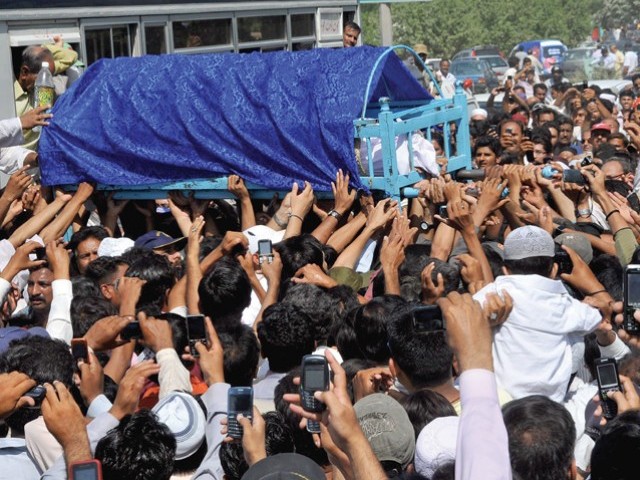 His son Shafiq Anwar told The Express Tribune that for Mehboob, his eldest son Moin Akhtar’s death came as a blow on April 22 this year. PHOTOS: MOHAMMAD AZEEM/EXPRESS

The father of iconic comedian and actor, the late Moin Akhtar, Muhammad Ibrahim Mehboob, passed away at the age of 92, on Wednesday night.

Muhammad Ibrahim Mehboob fought poor health for eight months and breathed his last at about 11:30pm at his residence at Federal B Area.

Born in Muradabad in India, Mehboob passed his life in his own printing press and as a contractor in the garments business after he migrated to Karachi at the time of partition.

His son Shafiq Anwar told The Express Tribune that for Mehboob, his eldest son Moin Akhtar’s death came as a blow on April 22 this year. “My father was quite active before Moin Bhai’s death,” he said. “Though he was old, he used to walk to the bazaar. But the news of Moin Bhai’s death shocked him and his health started failing.”

Another younger son Muhammad Aslam recalled how their father had given them a free hand. “My father was a self-made man. He was a broadminded father. He never stopped us from doing anything and never forced us to do something,” Aslam recalled.

Moin Akhtar’s son Mansoor Akhtar said that his grandfather and grandmother were their source of inspiration and guidance. “Their teachings and guidance were good and they played a vital role in our success.”

His funeral prayers were offered at Masjid Al-Ghani in Federal B Area and he was laid to rest at Sakhi Hassan Graveyard, near his wife. He leaves behind two sons and a daughter.

In a rare show of courage, Thatta bride fights for free-will choice