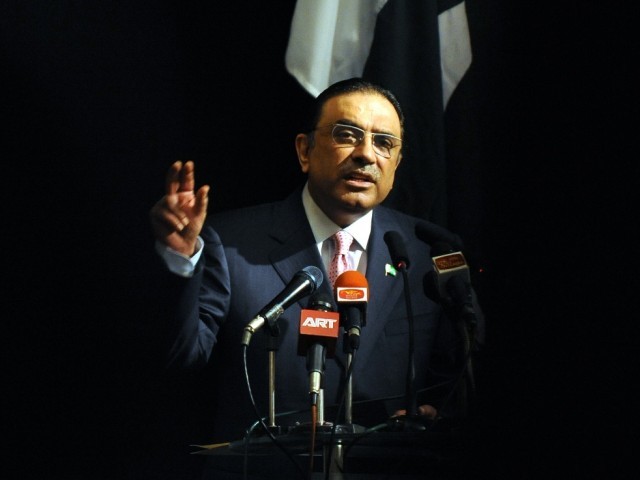 The Attorney General had earlier ruled out the submission of Zardari’s reply in the Memogate case. PHOTO: AFP/FILE

President Asif Ali Zardari will meet Attorney General Maulvi Anwarul Haq today and seek legal advice from him regarding his reply to the Supreme Court ‘s notice in the Memogate case, Express News reported on Tuesday.

Last week, when the president was unwell, the Attorney General had ruled out the submission of Zardari’s reply in the Memogate case.

“I have no instructions on filing the president’s reply,” Haq had told reporters on the premises of the Supreme Court.

The Supreme Court had later directed all the petitioners and respondents, including Zardari, to “clear the cobwebs in the different stands” taken by all those wrapped up in the Memogate scandal.

Addressing Attorney General Maulvi Anwarul Haq, the chief justice had observed that the reply everyone had been waiting for, that of the president, had not been submitted.

“You know well that an adverse presumption is drawn when someone does not file a reply in civil litigation,” Chief Justice Iftikhar Muhammad Chaudhry had told the attorney general.

However, since his return a number of meetings have been held by the president. According to a  sitting minister President Asif Ali Zardari’s return made it clear that he isn’t afraid of facing challenges confronting him. Today’s meeting with the legal team will contemplate the President’s reply to the Supreme Court and also dispel the impression that there is clash between the government and the judiciary.

The president is due to meet members of Pakistan Peoples Party (PPP) and other important personalities today. The country’s political and security situation as well as other matters of importance are expected to come under discussion during the meetings.