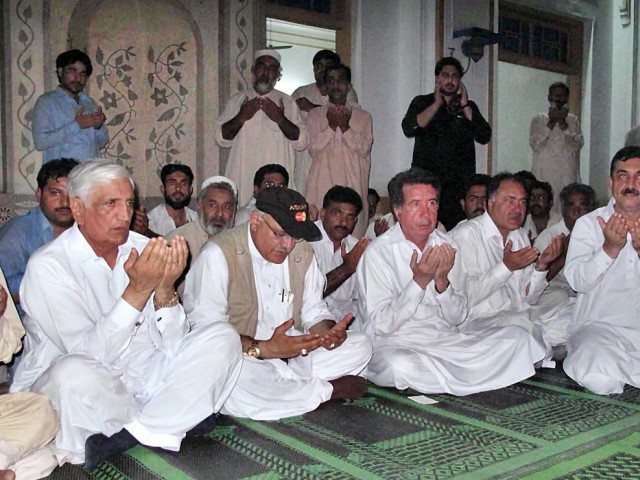 The anti-Taliban K-P information minister was on the militants’ hit list. PHOTO : APP

Chief Minister of Khyber Pukhtunkhwa, Ameer Haider Hoti, senior ANP leadership and people from all walks of life attended the funeral. Strict security arrangements were made for the funeral. Police officials have said that Rashid’s murder was a target killing, and an FIR has been registered against three unidentified men.

Speaking to the media outside Mian Iftikhar Hussain’s residence in Peshawar,  Hoti said maximum security is being provided to individuals who are on the hit list of terrorists.

Updated from print edition (below).

Unidentified assailants shot dead the son of Khyber-Pakhtunkhwa Information Minister Mian Iftikhar Hussain outside his residence on Saturday evening in what is suspected to be a targeted hit by Taliban-linked militants.

According to Hoti, the 26-year-old Mian Rashid Hussain was shot by two men on a motorcycle as he walked outside his house with his cousin Amjad, who was injured in the incident. Rashid, however, died on the spot. He was Mian Iftikhar’s only son.

The body of the information minister’s son was taken to Pabbi Satellite Hospital following the incident. According to the post-mortem report, Rashid was hit multiple times – shot in four times the head and six times in the chest. Amjad, his cousin, was safe, shot only in the leg, and was taken to Lady Reading Hospital, Peshawar, where, according to media officer Jamil Shah, his condition is not critical.

Investigations into the murder are under way, but family members are convinced that the incident was a targeted hit. Militants had been hurling threats at Mian Iftikhar for  a while now, and it had been reported on several occasions that his name, along with most of Awami National Party (ANP)’s leaders, was on the hit list of militants. Mian Iftikhar is also the most vocal critics of the Taliban in the provincial government.

Bashir Ahmad Bilour, senior minister in the Khyber-Pakhtunkhwa government, squarely blamed the Taliban for the attack. “Mian Iftikhar Hussain has always raised a voice against terrorists and this was the only reason that his son was attacked,” he said. However, he has vowed to never bow down to them.

The killing has been widely condemned, including by Prime Minister Yousaf Raza Gilani, President Asif Ali Zardari, ANP chief Asfandyar Wali Khan and Interior Minister Rehman Malik. Following the murder, people, including politicians such as Ghulam Ahmed Bilour and the Khyber-Pakhtunkhwa chief minister, gathered at Iftikhar Hussain’s home in Pabbi. Due to security reasons, people who were there to pay their respects and participate were moved from the house to the nearby mosque.

Rashid’s family member Haji Niaz said that Rashid had recently completed his post-graduate degree in Political Science from Peshawar University and was working as an assistant director in Peshawar Development Authority. He was due to be married soon, Niaz added.

The funeral will be held today (Sunday) at 11 am.

(with additional reporting from wires)