On the run with Pakistan's Taliban

On the run with Pakistan's Taliban 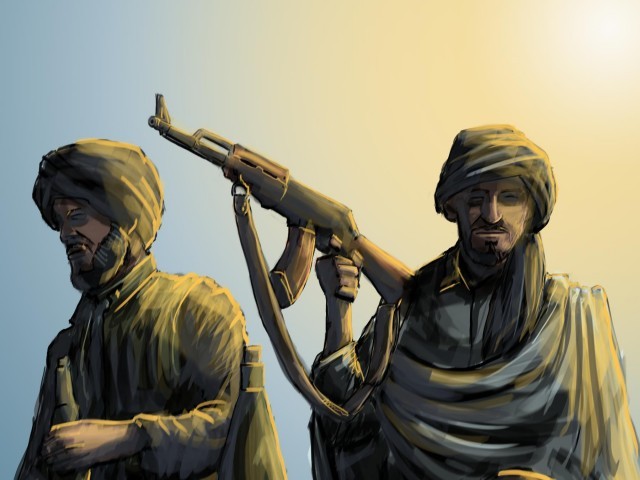 Reporter takes a tantalising glimpse of the day-to-day life of a group of Pakistani Taliban in North Waziristan. ILLUSTRATION: JAMAL KHURSHID

BANNU: Nothing terrifies Pakistani Taliban fighter Tariq Wazir more than US drones, a harbinger of instant death invisible to the naked eye and proof of America’s mastery of the skies.

Each time he hears the low hum reminiscent of a bumble bee, fear clutches his heart and he remembers how 20 of his comrades were pulverised by missiles they never saw coming in Pakistan’s tribal areas.

Gone are the days of communicating by phone and travelling freely. Instead he spends his days praying or reading newspapers in safe houses, moving under the cover of darkness, trying to keep one step ahead and stay alive.

An AFP reporter was this week given a tantalising glimpse of the day-to-day life of a group of Pakistani Taliban, travelling with them for four days between safe houses in North Waziristan.

He and three other journalists were invited to interview the head of the faction, Hakimullah Mehsud, or “another top Taliban leader” but the interview never materialised, due to what the Taliban said were “security reasons”.

Instead, they spent each night on the move, resting by day in relatively comfortable mud-brick homes with kitchens, running water and toilets, offered freshly cooked meals and fizzy drinks.

It was a relatively sophisticated logistics operation that shows how embedded the Taliban are in North Waziristan, where the Pakistani military has resisted US pressure to launch a sweeping offensive.

Their fervour for fighting and hatred of the United States and the US-allied Pakistani government was plain to see.

But so too were lighter moments, like sunning themselves in the courtyard, reading the Urdu newspapers to keep abreast of events and listening to songs praising the glory of jihad blasted out of cassette players.

In the past three years, there have been 236 US drone strikes in Pakistan, killing at least 1,767 people. Taliban foot soldiers admit they have had a devastating impact on their lives.

“I lost 20 close friends in drone attacks. It’s the biggest danger for us,” said Wazir, a commander in North Waziristan who refuses to give his real name.

“It has restricted our movement. We take a lot of care before moving from one place to other, we avoid using the phone,” he said.

Precautions have not been relaxed despite a one-month reprieve in missile strikes since November 17.

The Long War Journal quoted US intelligence officials as saying the attacks are “on hold” so as not to further strain the alliance with Islamabad after a Nato air strike killed 24 Pakistani soldiers on November 26.

In response, Pakistan shut its Afghan border to Nato supplies and evicted US personnel from the Shamsi air base, a reported hub for CIA drones, although most of the aircraft are thought to take off from US bases in Afghanistan.

Pakistani officials concur there is a temporary moratorium on drone attacks, but witnesses say surveillance flights are incessant.

The Taliban fighters wear the uniform of any adult man in the tribal belt. They carry Kalashnikovs wherever they go, tuck pistols into their belts and sometimes sport hand grenades around their waists.

Dressed in traditional shirts that fall to the knees, caps rolled down over the ears, waistcoats and balloon-style trousers, they conceal their guns under the itchy folds of the blankets wrapped around the head and shoulders.

Aged mostly 22 to 42, all of them were bearded and Ameer Sahib – a mark of respect – was a common name for each other, at least in the presence of reporters.

At dusk, they were on the move, driving down lesser known tracks away from the prying eyes of informers. They picked their way gingerly, without lights. Hand torches can be used, but only in an emergency – and then only briefly.

They sought shelter in one-storey mud homes, where blankets and old Afghan carpets provide a modicum of warmth. Women and children were never seen.

The fighters prepared their own food, collecting firewood from the mountains and sipping on green tea, offering the Mountain Dew soft drink to guests.

Halwa, a local sweet, was served on arrival. Dinners were generous helpings of beef, mutton or chicken, served up with rice, potatoes and vegetables.

Dried fruits and nuts are a popular snack, peanuts and cashews a particular favourite.

Looking through the newspaper, the Taliban pounced with delight on Iran’s claim to have shot down the bat-winged RQ-170 Sentinel stealth drone.

“See how Iran forced it to land! Why can’t our government do this?” said one. “They are getting dollars, they have sold the whole of Pakistan to the Americans,” replied a second militant.

Their hatred of the government stems from Islamabad’s fractious alliance with Washington.

Pakistan has adopted a more aggressive tone towards Washington as relations have gone into free fall since a covert American raid in May killed Osama bin Laden, which some commentators have linked to a decline in militant attacks.

“Whenever Pakistan has tensions with America, we see calm here,” smiled Wazir, a nod also to the let-up in drone strikes.

Several of the fighters told AFP that militancy runs in the family.

Habibur Rehman Mehsud, who said he had survived two drone strikes, said his father and uncle died fighting the Soviets in the mid-1980s in Afghanistan.

His entire family fled a Pakistani military offensive in 2009.

“It’s a reality that drones are the major threat to us but it is also a reality that Pakistan provided all the information to the Americans,” he said.

Mujeebur Rehman, 25, another Taliban fighter, said he lost his elder brother in a drone strike in the Mir Ali area of Waziristan in 2010.

Abdul Salam, who comes from near Miranshah, the capital of North Waziristan, said his brother, younger sister and father were killed by a drone in 2009.

He said he wanted to go to Afghanistan and fight against the Americans who killed his family. “My basic duty is to fight jihad. Avenging my family comes second.”