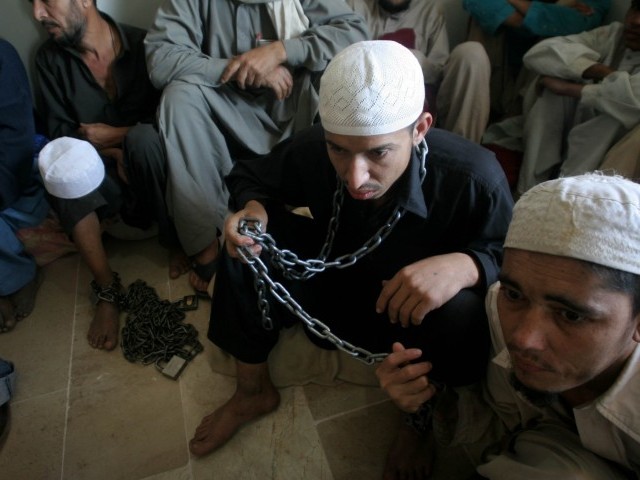 If a seminary can be used as a dungeon and torture cell for an indeterminate period of time, what other illegal activities are unmonitored madrassas getting away with? PHOTO: ATHARKHAN/EXPRESS

The recovery of 45 people, many of them minors, who were held captive at a seminary near Sohrab Goth in Karachi, highlights both the failure of madrassa reform and the need to restart the process of registering and monitoring these schools. Figures from the ministry of religious affairs show that there are about 18,000 registered madrassas in the country, but unofficial estimates put the actual figure at more than double that number. Part of the problem is that registration was made voluntary, ensuring that only those seminaries which intended on complying with the government would register, while those seminaries being used for extra-educational purposes would escape the government’s net. The education ministry had also been provided over $70 million in aid to modernise the curriculum in madrassas but most of the funds were not utilised due to non-cooperation from the seminaries. Obviously, the least of the problems with this particular seminary was its syllabus but had it been registered it would have given the government an opportunity to regularly monitor goings-on there. A lot of the captives, it turns out, had been sent to the seminary by their parents because they had drug abuse issues and other problems. In addition to those running and working for the seminary — who should have cases filed against them immediately — any parents who knew what was being done to their children and still consented to that treatment, should also be charged. And until that investigation is complete, it may be imprudent to hand the children back to their families.

While there is no reason to believe that this seminary was involved in militant activity, given the track record of madrassas in producing radicalised youth, the incident should serve as a wake-up call to police officials around the country. If a seminary can be used as a dungeon and torture cell for an indeterminate period of time, what other illegal activities are unmonitored madrassas getting away with? It would be unfair to tar all madrassas, most of which provide their students with free education, room and board, with the terrorism brush. But they have to, as all educational institutions should, be subject to regulation.

Between ‘ghairat’ and strategy