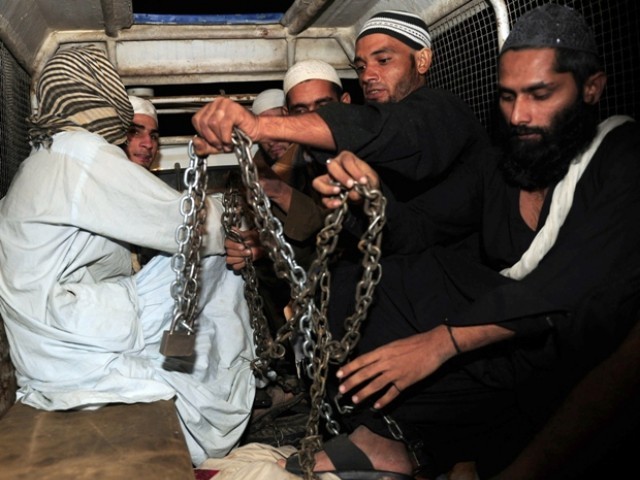 Students sit in a police vehicle after being rescued following a police raid on Madrassa Zakarya in Karachi late on December 12, 2011. PHOTO: AFP

KARACHI: Police on Tuesday registered cases against five persons who were allegedly involved in chaining up and confining students in the basement of a seminary located in the Afghan Camp area of Sohrab Goth.

Cases were registered under Section 42, Section 44, Section 6B and Section 37 for threatening, torturing and molestation.

Police official Mukhtiar Khaskheli told AFP that a full scale investigation had been started which would also conduct an inquiry about any possible links with militants.

“The madrassa officials claim that they had chained those students because they were drug addicts and they wanted to rehabilitate them and make them better Muslims,” the police official said.

Maulana Dawood, Maulana Abdullah, Qari Fakhruddin and Qari Qudratullah have been declared as escapees in the case.

Earlier on Monday night, police recovered at least 50 students from the seminary.

Police officials said the seminary was also functioning as a rehabilitation centre and the administration was receiving considerable sums of money from the parents of those who were kept on premises for this purpose.

Guardians of the students have declined to become witnesses in the case proceedings. Speaking to Express News, they confirmed that they had enrolled their children in the seminary.

Sindh Governor Dr Ishratul Ebad has taken strict notice of the torture and abuse of children who were found chained at a seminary in Afghan Basti of Sohrab Goth area and ordered an immediate inquiry into the matter.

In an official statement issued, the governor has ordered the Inspector General (IG) of Police Sindh to take prompt action against elements involved in the incident.

He said that such heinous acts of human rights violations and torture in a civilized society would not be tolerated at any cost.

Ebad said seminaries were academic institutions and taking care of its sanctity should be our first priority. He also appealed to religious scholars to cooperate and play their role in this regard.