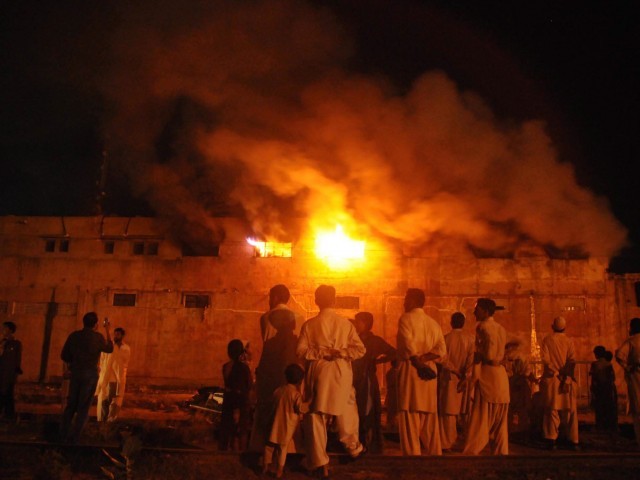 KARACHI: Two warehouses near II Chundrigar Road were burnt in a fire that erupted on Monday evening.

About 100 people were present in the building but fortunately there were no casualties.

The plastic and sugar warehouses were in a single-storey building that spans an area of 2,000 square feet on Talpur Road. Four godowns were on the first floor of the building while the ground floor had offices.

The fire erupted in the plastic godown at about 5:30 pm. Four fire tenders were dispatched to the site immediately, said the fire fighting officials, while seven more vehicles were called at the scene later.

It took around two and a half hours to put the fire out. Initial inspection suggested that the fire erupted after a short circuit, according to the chief fire officer, Ehtishamuddin Siddiqui.

He said that the fire could not be contained because of the inflammable plastic in the godown.

A heavy contingent of police also reached the site when the godowns were ablaze. According to SHO Aurangzaib Khattak, no evidence was found of any criminal involvement in the incident. Earlier in the afternoon, another fire also broke out in the kitchen on the fourth floor of Habib Bank Building.  The fire brigade officials said that it was controlled before they reached the site and nobody was hurt.