Fawad Bokhar­i is unsure of his date of birth but can accura­tely recall his first day workin­g at Karach­i’s Sunday...
By Sadia Ahmed
Published: July 27, 2010
Tweet Email 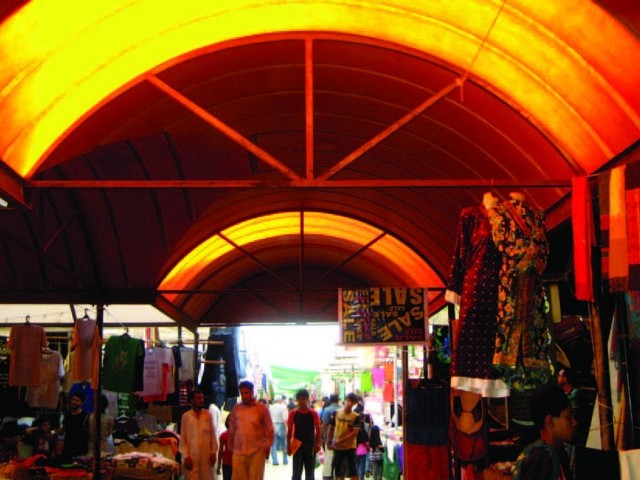 KARACHI: Fawad Bokhari is unsure of his date of birth but can accurately recall his first day working at Karachi’s Sunday Bazaar: “I started off with a small stall in the winter of 1986 with my father. The bazaar has evolved drastically since.”

From ’86 onwards, Bokhari has kept up his weekly Sunday routine of selling new and second-hand clothes to a dedicated clientele at what is colloquially known as Itwaar Bazaar.

The new home for this market is in Sector E of the rather quiet Phase VIII of Defence. It’s spread out over 25.5 acres — almost double the size of the old Sunday Bazaar. The otherwise deserted area streams with cars of all hues and sizes every weekend and has, according to Fawad, “morphed into Asia’s biggest open-air market.”

The revamped Sunday Bazaar is a far cry from the old, with its unpaved lanes, dust-laden air from un-cemented floors and a marquee which barely sheltered one from the elements. The new bazaar has facilities for shopkeepers and buyers alike. Compared to the green traditional tents of old —  which leaked during the rainy months — the new bazaar boasts tiled floors and the coloured fibre-glass roofing is meant to protect both shoppers and shopkeepers from both the blazing summer sun and monsoon rains, though the floor tiling actually works to retain heat in summer and one wonders what the need was to spend money on something that was functioning perfectly well already.

Comfortable resting areas with around 200 benches, a cheap and cheerful food court, a play area for children, 1,850 shopping stalls to choose from, and two spacious parking areas are the latest additions. It isn’t just the bazaar that has been modified to facilitate shoppers, but the roads that lead to Phase VIII have also been reconstructed and more street lights have been installed.

The DHA’s initiative to modernise Sunday Bazaar was based on the idea of providing a well-designed, convenient, and comfortable shopping area for residents of Defence where they could buy everything from household goods and groceries to books and clothes, all under one roof. Sunday Bazaar is one the few Pakistani public areas that is able to gather people from all walks of life with the lure of good, cheap and affordable shopping.

Regardless of the renovations, Fawad and other shopkeepers are under continuous pressure just to make ends meet. Mohammad Sharif, who has been selling household utensils for the past decade, says, “Being a vendor at Itwaar Bazaar these days is just a little better than doing daily labour work — it doesn’t always pay off. Purchasing power has gone down, and it’s hitting us hard.”

Bargaining remains a dominant part of the culture in Sunday Bazaar. In a country where having three meals a day is a dream for most, and sweating away for a pittance their destiny, buyers and vendors alike haggle over every last penny. “If I don’t lower my prices, buyers will go to another vendor and I’ll lose out on my clients,” says one shopkeeper, adding that competition was cut-throat.

What hasn’t changed at Sunday Bazaar is the tradition of child labour. Boys as young as five roam the market with big baskets, willing to lug around your day’s shopping in return for a hundred rupees. Sweet-faced, shy Abdul Rahim, 11, who lives and goes to school in Sohrab Goth, works at the bazaar, along with his two brothers, as a coolie. Since his earnings can go up to Rs1,000 on a good day, Rahim’s salary is crucial to his seven member family. Things may have changed at Sunday Bazaar but they certainly haven’t improved.