Aircraft to evacuate American personnel, drones arrive at Shamsi base

Aircraft to evacuate American personnel, drones arrive at Shamsi base 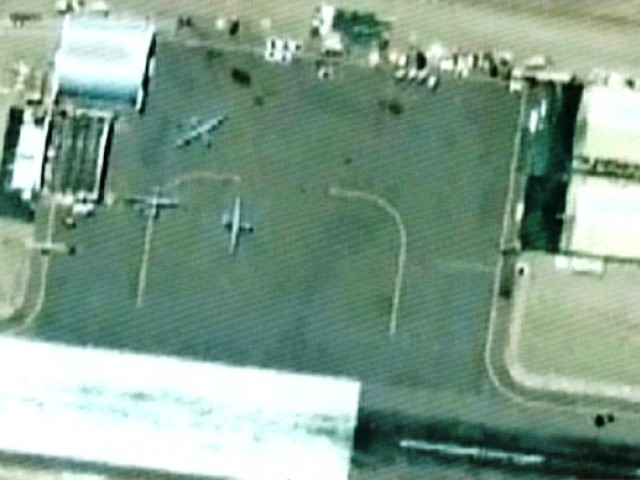 Aircrafts land in Pakistan to fly US nationals from Shamsi airbase in Quetta back to America.

QUETTA / ISLAMABAD: At least seven aircraft landed at Shamsi airbase in Balochistan on Wednesday to airlift personnel and equipment out of Pakistan.

According to sources in Washuk district, American officials were likely to vacate the airbase on Thursday.

“Seven aircraft have landed here since morning,” a local confirmed, adding, “They also set several containers on fire today and we saw its thick flames rising. The containers were used by American officials.”

Sources also reported that that some equipment was loaded onto the aircrafts. However, drones stood in nearby hangars and an American radar was also visible that had so far not been shifted.

No US official was available to comment on whether American will vacate the airbase on Thursday.

The base was leased to the United Arab Emirates, who used to visit Pakistan for hunting, until the catastrophic attacks of 9/11 on the World Trade Centre and Pentagon. After Pakistan joined the US-led war on terror, the base was given to the American military to facilitate logistical support.

Following the NATO air strike on a Pakistani border checkpost on November 26, Pakistan demanded that the US leave the remote air base and blocked ground supply routes to US forces in Afghanistan.

The controversial air base, located about 300 kilometres south of Quetta, has been used as a key launch pad for drone strikes in Afghanistan and allegedly also for those carried out in Pakistan’s own tribal areas.

US to vacate Shamsi airbase as per deadline: Rehman Malik

Federal Interior Minister Rehman Malik said on Wednesday that United States would vacate the Shamsi airbase as per the deadline given by his government. Talking to media outside the Parliament House, he said “We are expecting that the US will vacate the Shamsi airbase as per deadline given by the government.” To a question, he said around 36,000 people had lost their lives in the war against terror. He urged the US to stop drone attacks. The drone attacks have been condemned by the government, opposition and people of Pakistan.

“US must pay attention to the voice of the people of Pakistan and stop drone attacks as these are against the sentiments of people,” the minister said.