Many parts of the city remain­ed knee-deep in water on Thursd­ay.
Published: July 23, 2010
Tweet Email 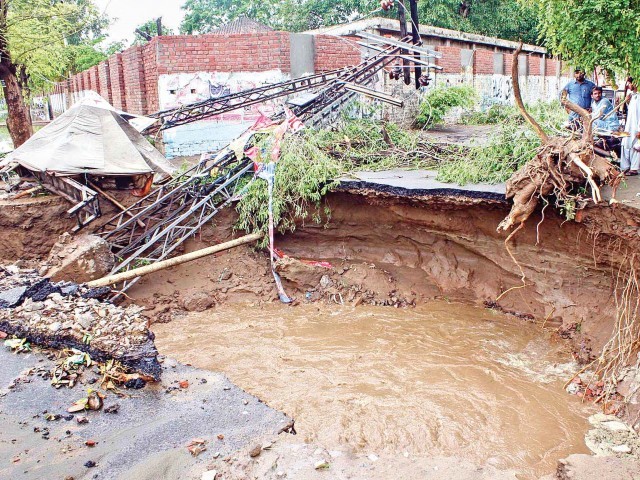 LAHORE: Many parts of the city remained knee-deep in water on Thursday.

The Wasa disposal system which caters to Barkat Market and Centre Point went out of order due to technical fault.

The president of Model Town Society (MTS), Col Tahir Kardar, told The Express Tribune on Thursday that lack of a rain water disposal system led to accumulation of water in Model Town.

He said that the sewers were laid in Model Town 59 years after the town was established and lacked the capacity to carry rain water.

The sewerage lines which carry rainwater through Wasa disposal system at Model Town Link Road kept waiting for many hours to be cleared as Wasa’s water pumps remained busy clearing other areas including Green Town and Township.

“There were water channels before each house that carried the rainwater but these channels had been closed.  Usually we wait for receding of water from roads into nearby grounds in each block.

However, this time the downpour was heavy so that the grounds could not table as much water,” he added.

He claimed that seven critical points were identified during a survey conducted on July 21, which were more likely to be flooded and the DCO who visited the area was briefed about those points.

Mateen Ahmed Rana, a member of the MTS managing committee, complained that the two trucks available for the removal of water were kept busy in E-block near the residence of former nazim Mian Amer.