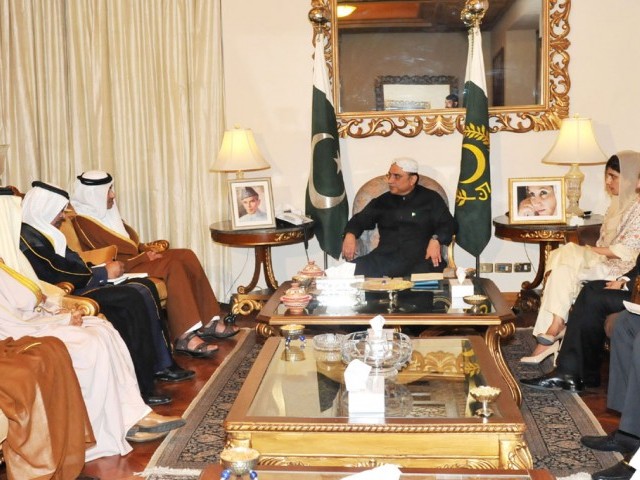 ISLAMABAD: Pakistan, it seems, is not yet ready to let go and is still seething over the pre-dawn Nato air raid that killed 24 of its soldiers on Saturday.

President Asif Ali Zardari has turned down a request by the United Arab Emirates to review Pakistan’s decision to ask the US to vacate the remote Shamsi Airbase in Balochistan, which is said to be under UAE control.

The Emirati Foreign Minister Sheikh Abdullah Bin Zaid al Nahyan, who arrived in Islamabad on Monday night, made the request in a meeting with the president and asked that Pakistan allow the US to use the base until investigation into the incident is complete.

Zardari told al Nahyan that the decision had been made by the defence committee of the cabinet, which met hours after the attack and decided that the US must vacate the airbase within 15 days, and must be followed as the nation felt strongly about the issue.

The controversial airbase, located about 300 kilometres from Quetta, has been used as a key launch pad for drone strikes in Afghanistan and allegedly also for those carried out in Pakistan’s own tribal areas. This is the third time Pakistan has demanded the US to vacate the base. Similar demands were made after CIA operative Raymond Davis killed two Pakistanis in Lahore and in the aftermath of the unilateral US raid that killed Osama bin Laden.

In the wake of Saturday’s raid, Pakistan is pushing for a new anti-terror cooperation agreement with the US, The Express Tribune has learnt.

A list of demands that Islamabad is preparing includes a written accord with the US to provide explicit guarantees that such attacks will not recur and halt the CIA-led drone campaign in the country’s tribal belt, officials said requesting anonymity.

The existing cooperation is based on ‘unwritten agreements and understanding’ reached between Islamabad and Washington during former military ruler General Pervez Musharraf’s regime and past efforts by Pakistan to renegotiate terms of engagement with the US have been unsuccessful.

Islamabad made a similar demand earlier this year when its relations were severely strained with Washington over the arrest of Raymond Davis. However, the authorities are now adamant that normal cooperation with the US can only go back on track if Pakistan’s concerns are addressed.

The demands, if not accepted, may compel Pakistan to not only withdraw its support to the war on terror but also pull out troops along the border with Afghanistan, said a security official. “This message has already been conveyed to the US,” he said.

However, another official said it was premature to contemplate such an ‘extreme step’ at this stage, though the option was very much on the table and might be used as a last resort.

Chief military spokesman Major General Athar Abbas said the Nato attack certainly has dire implications. “It is very difficult for us now to extend the kind of support that was there before this attack,” Gen Abbas said. However, he stopped short of saying if Pakistan will pull out its troops along the border with Afghanistan. “All such decisions will be taken by Parliament,” he said.

Top military commanders are expected to meet soon to discuss the fallout of the Nato strike and options to deal with the crisis. The corps commanders meeting to be chaired by Army Chief General Ashfaq Parvez Kayani will evolve a strategy not only on the incursions but also on pacifying ‘growing anger in the rank and file’ of the military.

Top military leadership is concerned about the ‘negative impact’ this incident has had on troops manning the rugged terrain on the Afghan border. “It is indeed a challenge for the military leadership to pacify that anger. How can we convince them (troops) that the Americans are our allies?” asked a senior military official.

(Read: After the Nato attack)

After the NATO attack