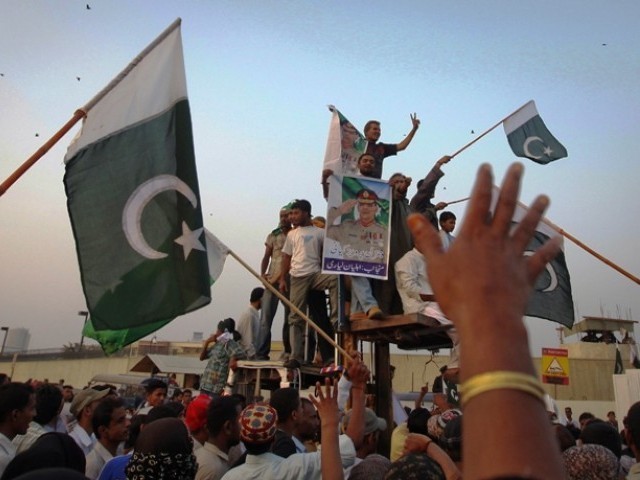 Thousands gathered outside the United States (US) consulate in Karachi. PHOTO: REUTERS

As Pakistan buried its dead from Saturday’s attack on a border check post by Nato troops, the government looked for more ways to express its anger against Nato and the United States for the incident. On Sunday, it threatened to review its role in facilitating talks with insurgents and re-think its participation in next month’s Bonn conference.

Prime Minister Yousaf Raza Gilani told Express News that Pakistan “will revisit its engagement with the US, Nato and the International Security Assistance Force (Isaf)” while an unnamed Pakistani official said that the country’s security establishment has already halted “all efforts to persuade the Afghan Taliban to come to the negotiating table.”

On Saturday, Pakistan decided to shut down key Nato supply routes, ask the US to vacate a remote airbase in Balochistan and review ties with Washington. Pakistan has also protested to Afghanistan over the attacks. It said that the use of Afghan territory against Pakistan was a violation of Isaf’s mandate for operations in Afghanistan.

For its part, the US Central Command said that it will conduct its own investigation into Nato’s involvement. General James Mattis, who heads the command, is expected to appoint an investigating officer by Monday. Nato officials privately insist that their troops were attacked first, a charge that the Pakistan military strongly denies.

A Pentagon spokesman said that Secretary of State Hillary Clinton and Defence Secretary Leon Panetta were closely monitoring reports of the incident. Spokesman John Kirby added: “Both offer their deepest condolences for the loss of life.”

Clinton, Army Gen. Martin E. Dempsey, chairman of the Joint Chiefs of Staff, and Marine Corps Gen. John R. Allen, commander of the International Security Assistance Force and of US Forces in Afghanistan, each called their Pakistani counterparts, the Pentagon spokesman said. Cameron P. Munter, US ambassador to Pakistan, also met with Pakistani officials in Islamabad.

Clinton and Panetta both stressed “the importance of the US-Pakistani partnership.” Nato secretary general Anders Fogh Rasumussen, however, fell short of a formal apology, and instead tweeted that the airstrike was a “tragic unintended incident,” adding “the death of Pakistani personnel are as unacceptable and deplorable as the deaths of Afghan and international personnel.”

Interior Minister Rehman Malik said that decisions of the defence cabinet committee (DCC) on the Nato forces’ attack would be implemented. Talking to the media in Islamabad, he said Nato supplies (through Pakistan) “had been stopped permanently.”

Pakistani officials also warned that the attack will have “huge implications” for the Afghan endgame.

When Secretary Clinton led a delegation last month to Islamabad, authorities in Pakistan had agreed with the US to convince certain insurgent groups, including the Haqqani network, to enter the meaningful talks for seeking a peaceful end in Afghanistan. “That process has now come to a halt,” said the official.

Republican Senator Jon Kyl called for “tough diplomacy” with Pakistan and urged Islamabad to cooperate to maintain its financial aid. “We do need their support in the region,” he acknowledged.

So furious are the authorities that the government has put on hold its decision on attending a key international conference on Afghanistan slated for December 5 in Bonn. Foreign ministry spokesperson Tehmina Janjua said the decision to attend the Bonn conference “was being examined.”

It is believed that Islamabad will now set certain pre-conditions before resumption of cooperation with stakeholders. Demands include a formal public apology, a thorough investigation, action against those responsible, compensation for the families of victims and firm guarantees that such incursions are not repeated.

FM Khar called her counterparts from key Nato countries on Sunday.  Khar spoke to Clinton on the decisions taken by the DCC after the Nato attack. Turkish Foreign Minister Davutoglu assured that as a member of Nato, Turkey would ask for an impartial inquiry.

with Additional input from agencies

America is no friend, says Taliban