They were killed when allege­d SSP member­s shot at a camp near an Imamba­rgah.
Published: November 27, 2011
Tweet Email 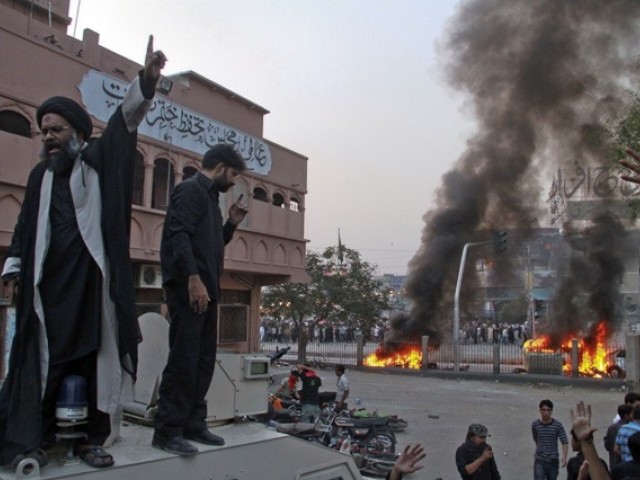 A Shi'ite cleric speaks to the protesters after clash between in Karachi November 27, 2011. PHOTO: REUTERS

KARACHI: Muharramul Haram began on a bitter note as two men were killed while a third was wounded when a scout camp was shot at Numaish Chowrangi on M A Jinnah Road on Sunday evening.

The incident, that occurred at about 4:30 pm sparked protests that left parts of M A Jinnah Road ablaze well into the night. Law enforcers finally managed to disperse the majority of the charged crowd by 9 pm after resorting to heavy aerial firing that left eight people injured including a television reporter.

Earlier, the Ahle Sunnat wal Jamaat, formerly known as the Sipah-e-Sahaba Pakistan (SSP), held their annual Yaum-e-Omar rally at Tibet Centre. Nearby, at Numaish Chowrangi, scouts are deployed at a camp set up annually to help organise Muharram proceedings at the Shah-e-Khurasan Imambargah. As the rally dispersed and participants moved towards the roundabout and shots were fired at the camp. Scouts Zainul Abideen and Azhar Ali died instantly while Ayaz Ali was wounded. They were taken to Civil hospital. Zainul Abideen and Ayaz were with the Buturab Scouts while Azhar with theHyderi Scouts.

The reaction was immediate. People gathering at the Imambargahfor the majlis rerouted to the roundabout and the situation escalated into a protest. Assuming that the shooters were taking refuge in a masjid-cum-madrassa that belonged to the rival school of thought opposite the camp, the protesters flocked to the mosque and besieged it. They gathered the vehicles in the parking lot and set them on fire. In the havoc, fire tenders were unable to save the burning vehicles.

The Rangers, who are deployed in this sensitive corner of Saddar around the clock, cordoned-off the area and entered the mosque. It is believed that the Rangers detained 50 people from inside, including three alleged shooters, but were not able to extricate them from the mosque surrounded by the mob demanding an eye for an eye.

There were also 50-odd people inside the mosque that would have been as good as dead had the authorities left with three men in their custody. They reportedly spent hours preparing an escape route in the back and getting the people out safely. All fifty are in their custody.

Despite getting the three armed suspects into their armoured personnel carrier, it took the authorities an hour of aerial firing and shelling to clear a passage. There were also reports that the mob also opened fire and pelted the law enforcers with stones. Even after the crowd dispersed, the area was gripped with tension and there were reports of men forcing shops to close in different areas.

The Shia Ulema Council condemned the incident and said that it would protest.

“The aim of the perpetrators was to stop our mourning and ours is to keep it going,” said Shia scholar, Allama Abbas Kumaili.

For their part, ASWJ spokesman Maulana Taj Hanfi distanced his party from the incident and termed it a conspiracy. “Why are we blamed whenever something like this happens?” he asked.  Home Minister Manzoor Wassan took immediate notice of the incident and ordered the District South DIG Commandant, Shaukat Ali Shah, to give his top priority on the compilation of a report on the incident.

The three suspects are being questioned and two investigation teams have been formed, led by the Crime Investigation Department and DIG East.

DIG Commandant Shah said that the men attacked the camp on their way back from the Youm-e-Omar rally at Tibet Centre. He said that the situation turned violent when the law enforcers refused to hand the culprits over to protesters.

Police claim they were trying to get the people inside the mosque out which is what caused the delay.