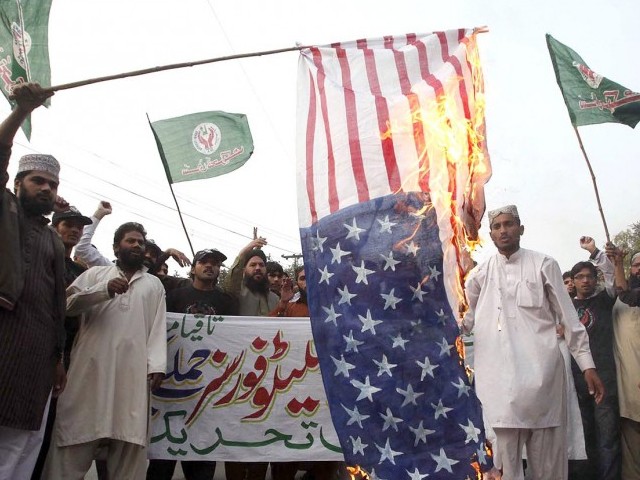 Protestors burning a US flag, protesting againt the Nato attack on the checkpost on Saturday. PHOTO: INP

LAHORE: Banned group Jamaatud Dawa (JD) protested in front of the Lahore Press Club on Sunday – its third demonstration in the city in a week – against the granting of most favoured nation (MFN) trade status to India and the NATO attack on Pakistani troops.

Some 800 protestors from Al Muhammadia Students Pakistan, JD’s youth wing, gathered at the press club carrying banners and placards calling for, among other things, Pakistan’s withdrawal from its alliance with the United States. Some young men wielded daggers. They later travelled in buses to Nasser Bagh and offered prayers for the Pakistani soldiers.

Addressing the rally, JD leaders urged the young protestors to prepare for jihad and urged the Pakistan Army to give a “befitting response” to the “NATO aggression”.

Maulana Abdul Rauf Farooqi said the Taliban, Muslims and Islam would succeed and their enemies would fail. He said “the enemy” had challenged Pakistanis by attacking the soldiers on Pakistani soil. He said if Shamsi Airbase was not vacated in 15 days, as the Pakistan government has demanded of the US, they would announce “a new war and jihad” against the Pakistani government.

He said this “new jihad” would be formally announced at the Defence of Pakistan Council rally at Minar-i-Pakistan on December 18. He said the US was “the mother of all evils” and the root of all Pakistan’s problems.

JD leader Maulana Ameer Hamza said the US was not an ally but an enemy. He said the US had been responsible for acts of terrorism in Pakistan for many years. He said instead of issuing “mere condemnation statements”, the government should force US citizens to leave Pakistan. “We have to eliminate all stations and bases given to the CIA if we want to end terrorism in Pakistan. All Pakistanis must get ready for jihad,” he said.

Jamaat-i-Islami leader Farid Ahmed Paracha said jihad was the only answer to “terrorism of any form, including drone attacks and attacks on checkpoints”. He said only jihad could rid Pakistan of external intervention. “We should go for an eye for an eye,” he said.

Syed Ali Gilani, leader of the Hurriyet Conference in Indian-held Kashmir, said in a telephone address that Pakistan’s problems lay in its alliance with the US. He said instead of giving India MFN status, Pakistan should help the Kashmiri people. He said Pakistan’s friendship with India hurt Kashmir’s struggle for independence and Pakistan’s sovereignty.

Professor Hafiz Abdul Rehman Makki led the funeral prayers at Nasser Bagh. He said every Pakistani had a duty to fight to defend the country’s borders and avenge the death of the soldiers in the NATO strike. “We urge the people of Pakistan to rise against the enemies of Pakistan and Islam. We will visit every nook and cranny of the country in this regard,” he said.

Jamaat-i-Islami Punjab Ameer Dr Syed Waseem Akhtar in a statement condemned the NATO attack as “an act of extreme cowardice” that must be answered “bluntly”. He said Pakistan’s people stood shoulder-to-shoulder with the army. He said the NATO supply line must be cut and airbases vacated permanently.