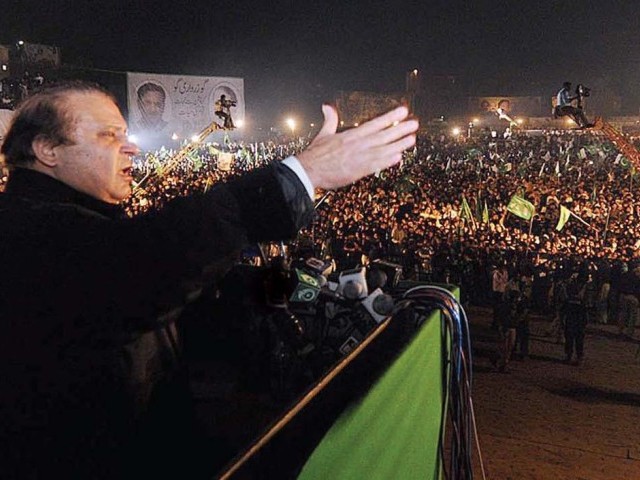 On November 20, the PML-N returned to its old vendetta style politics with the PPP and Nawaz Sharif asked the mammoth gathering at Faisalabad to elect his party again to get rid of a government that was steeped in corruption, had ‘sold the sovereignty’ to the Americans through a memo written by President Zardari and had betrayed the Kashmir cause by putting it on the back-burner for 10 years while allowing India the Most Favoured Nation (MFN) status.

He contrasted his own period of governance in the 1990s with what he called dysfunctional governance under the PPP, saying how he had defied the Americans by testing the nuclear device, had achieved eight per cent growth to today’s two per cent and had built the motorway. He demanded inquiry into ‘the affair of the memo’ and threatened to go to the Supreme Court if it was not appropriately carried out. He hinted, while referring to the Pakistan Army in the affair of the memo in a positive manner, that he was ready to forget the past and coexist with the remnants of the Musharraf regime if midterm elections were made to materialised.

His hostile reference to Imran Khan, without naming him, seemed a kind of warning to the establishment against choosing Tehreek-e-Insaf as the next ruling party. Chaudhry Nisar Ali Khan appropriately filled in the blanks by explaining how a reconciliation with the army would be possible. The PML-N rally in Faisalabad seems to have set a tone of confrontation with the PPP, which has traditionally polarised the country and forced the smaller parties to line up according to who will offer them more bounties of shared power.

Nawaz Sharif is finally out of the intellectually attractive grey area of not wanting to destabilise the elected government and cause it to fall before its term. The lessons learnt from the ‘power chaos’ of the 1990s were conveniently forgotten on the misleading principle that the common voter is fundamentally a visceral human being with a Manichean world view, making moral decisions only in a battlefield environment: the PML-N will not be good if the PPP is also good; hence the PPP is the villain whose ouster by the PML-N will bring about the utopia Pakistan was originally promised but never permitted.

The reverse transformation of Nawaz Sharif was taking place gradually as the PPP in power got itself embroiled in corruption, got into trouble with the army and began to experience a peeling of the plasters in its Sindh edifice of power. The second echelon leaders of the PML-N, more pragmatic than Mr Sharif, never liked the intellectual posture of letting the PPP finish its tenure. They finally got him to come around to their way of thinking. They wanted him to return to the ‘Long March’-mode when he had taken to the road and got the judiciary restored. Now, the foil is off the rapier and the old toppling practice is back.

Sharif contradicted some earlier stances to appeal to his party’s conservative ranks and to its overall vote bank. His statements this year of normalising relations with India and taking big steps in the realm of economic contacts with it were laid aside as policy projection and the PPP was accused instead of letting the nation down on the Kashmir cause. Of late, he had already been uncomfortable with the right-wing reaction against the PPP’s grant of MFN status to India and he didn’t mind that his references to the ‘memo’ and India made him look as if he was realigning with the army — provided it looked with favour at the PML-N getting back in power.

Nawaz Sharif has his challenges stacked up against him. He wants quick elections because of the looming shadow of Imran Khan; he knows that the national economy is in the doldrums and this time around the Saudis might not come up with free oil; he is aware that non-state actors nurtured by the establishment will continue to insist on sharing power with him informally; he knows that he will have to continue to be anti-American for the sake of credibility, which will strengthen al Qaeda’s ability to call the shots and force him in an isolationist direction; and that he will have to cohabit with General Kayani despite mutual misgivings.