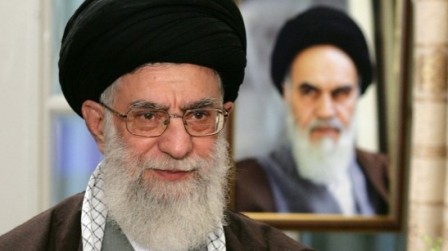 Ayatollah Ali Khamenei blamed the USA and UK for the bombings at the mosque last week. PHOTO: AFP

TEHRAN: Supreme leader Ayatollah Ali Khamenei Wednesday called on Muslims to fight the “blind and savage terrorism” fuelled by the United States and Britain, whom he blamed for deadly bombings of an Iranian mosque.

“In our region… the blind and savage terrorism is born out of the evil policies of the United States, Britain and their state and non-state mercenaries,” Khamenei said in a statement marking the seventh day of mourning for victims of the bombings of a Shiite mosque in southeastern Iran.

“All Muslims are required to combat and confront this evil and sinister offspring which is the epitome of corruption on earth and of waging war against God,” Khamenei said in the statement read out on state television.

Two suicide bombers on Thursday blew themselves up at a Shiite mosque in Zahedan, the capital of Sistan-Baluchestan province which borders Afghanistan and Pakistan, killing 28 people and wounding hundreds.

Sunni rebel group Jundallah (Soldiers of God) said it carried out the attacks to avenge the execution of its militant leader Abdolmalek Rigi in Tehran’s Evin prison on June 20.

Jundallah says it is fighting for the rights of the Sunni Baluchis who make up a significant population in Sistan-Baluchestan. Tehran has blamed the group for several such deadly attacks over the past few years.

Khamenei repeated the accusation, blaming US, Britain and Israeli spy agencies for the latest bombings in Zahedan despite Washington and the European Union leading a chorus of condemnation of the attacks.

This “bloody incident” was carried out by the “devious, bigoted Wahabis with the support and plotting of foreign spy organisations,” Khamenei said, adding the Zahedan bombings were aimed at dividing Iranian Muslims.

“The Shiite and Sunni thinkers in all Islamic and Arab countries should define the wicked intentions of the enemies which is to instigate sectarian terrorism for all and prevent them (Muslim nations) from the great danger of religious unrest,” Khamenei said.

He said Iran was the “target of the spy services of the US and Zionist regimes, and Britain” who wanted to “push it into religious unrest and into a Shiite-Sunni conflict.”

“But the Islamic republic will not allow the agents of global arrogance to incite division among Muslim brothers,” he added.

President Mahmoud Ahmadinejad has accused US forces in Afghanistan and Pakistan of backing the Zahedan bombings.

“If (US President Barack) Obama is unaware of actions of American forces, then we tell him that American forces based in Afghanistan and Pakistan back such actions,” he told a cabinet meeting on Sunday, referring to the bombings.