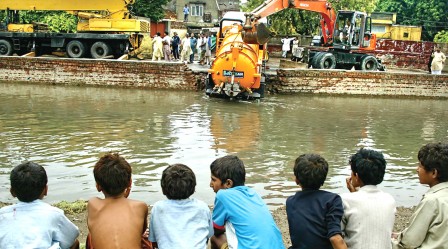 Children watch the excavation of a Wasa truck from an open sewer. PHOTO: RIAZ AHMED/DAILY EXPRESS

Talking to the media, he said that it was for the first time that the storm water drainage system in the city had produced results.

Happy with the performance of Wasa officials, Sharif praised them for curtailing the time required to drain the rain water. He observed that some of the areas that remained submerged in water for days last year have this year been drained within two to three hours.

He said that there were visible improvements in Wasa’s water disposal operations and that both public representatives and Wasa officials deserved credit for their efforts.

However, he was not satisfied with the pace of work at the MM Alam Raod. He said that water should have been cleared much earlier considering that the entire sewage system in the area was replaced recently.

He added that the officials in charge of work at the MM Alam Road would be taken to task.

In general, he expressed satisfaction with the fact that the staff of the concerned departments was present at most of the places he visited.

He held that the residents of the northern areas of the city had acknowledged that the water disposal arrangements had improved.